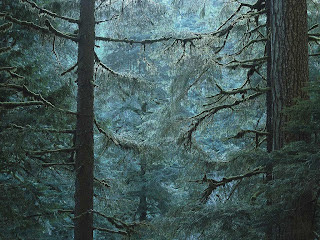 Much of Vancouver Island is logging country. With the fishery and mining in decline, if it wasn't for logging half of this island might not be populated at all. Since the days of the first (white) settlement here, logging has been a way of life.

The logging industry has sometimes been the subject of controversy, at times heated controversy. Environmentalists, often called "tree huggers", have used legal and illegal means to try to halt logging in the remaining old growth forests. Then there's the way some forest companies harvest trees, leaving clear cut swathes when they're done.

Now there's a carbon factor to consider in felling trees. Trees soak up carbon dioxide as they grow. The decaying vegetation, moss and small plants on the forest floor can also, over time, evolve into a carbon sink.

Logging in Canada today creates more greenhouse gas than all the truck and car traffic combined. A Vancouver-based group, ForestEthics has released a report calling for curbs on logging in Canada's boreal forest, the type found in the northern regions of most Canadian provinces.

The effect of logging on global warming was identified in the IPCC reports which claim that a quarter of greenhouse gas emissions can be traced to logging and deforestation.
Posted by The Mound of Sound at 10:07 AM