Why I Can't Stand Stephen Harper 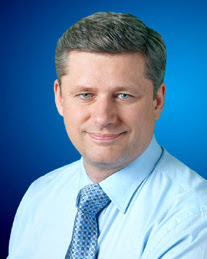 I don't like Harpo, not one bit. I guess that's because I don't trust him. He's the master manipulator, second to none. He lacks vision but he's up to his eyeballs in plans.

I don't like Harpo because he doesn't like me. Chances are, he doesn't care much for you either. It's no secret. He's come out repeatedly to make disparaging remarks about Canada and Canadians, slurs that reveal what this guy is truly made of.

We know pretty well what Canadians are and their common values. Studies and polls upon polls have shown that we have a consistently centrist, liberal viewpoint and values. Harpo doesn't share those values or that viewpoint. He can't stand what we stand for. It makes him embarrassed when he discusses Canada with his extremist right-wing pals in America. I embarrass Harpo and so do you. Harpo does not stand with the people of Canada, Harpo stands above them.

You sound quite worried. Will the
Natural Governing Party save the country? As a Liberal - tolerant of all views and progressive in all matters - you must delete and suppress this comment. Fung goo.

Your thoughts match mine exactly. As much as I hated Mulroney, even he was not as scary as Harper. Harper has many of the characteristics of a psychopath, but he is smart enough not to let too much of that show until he has a majority (heaven forbid).

Well put, as I have said before, when we see this bush posterior puckers real agenda, it will be to late, he is waiting for a majority.

I think I know what you hate most about Steven Harper. Next to your guy Dion, he looks like one of the greatest leaders this country has seen. So after seeing the latest poll numbers from southern Ontario, do you still think Dion's decision to vote down the anti- terror legislation was a wise move??

Agreed. Another reason I can't stand Stephen Harper is he's going to spend $2+million to flog his transit tax rebate, but only for those people who can pay $95 per month (1 zone in Van) the first day of the month, which is rent or mortgage day for most people. If a family has to stagger transit passes into weekly increments, tough luck for them.
Yet, $2 million dollars will be paid to an ad company to tout this great accomplishment which very few working Canadians will be able to access. I guess that's good business. Poor man always pays full price.
Smooth move Harper.

you could have saved all those words and typed this instead:

It's the same message, except that less and less people are buying it.