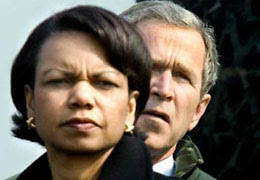 Six years of bombast, threats and violence have served the United States very poorly. Afghanistan and Iraq testify to the dangers of relying too heavily on military options, especially without the committment to see them through.
I've sometimes wondered where Bush's army would be stuck now if he hadn't invaded Iraq? In the wake of 9/11 there was an almost evangelical fury that attached to American foreign policy that made the use of force a much more valid option. If Iraq didn't exist I think the Bush administration would have found some other country to attack. Back then the thinking was to take a little country, throw it against a wall, and use that as an object lesson to all the other troublesome little countries. It was intended to cement the New World Order foreseen by the Project for the New American Century, the neo-cons.
Dangerous and unstable as the world was in September, 2001, the events since then have made it a much more dangerous, unstable place today. The shine has worn off the military option these days. Just keeping the existing wars going is straining not only the American military but also the British and even our own forces.
It was encouraging, therefore, to read a piece in today's New York Times about a shift in American foreign policy to talking instead of threatening:
"Administration officials insisted Wednesday that the new overtures, including an agreement to join Iran and Syria in talks on Iraq, did not mean there had been a change in policy. 'There is no crack,' the White House spokesman, Tony Snow, said. 'A number of people have been characterizing U.S. participation in a regional meeting as a change in policy; it is nothing of the sort.'
"But foreign policy experts, administration critics on Capitol Hill and former diplomats disagreed, saying the administration appeared to have recognized the extent to which it had tied its own hands by insisting on talking only to friends. Even Ms. Rice had called the opening to Tehran and Damascus a 'diplomatic initiative.'
“'The question isn’t whether the axis of evil is dead; it’s alive as it was yesterday,' said Daniel P. Serwer, a vice president at the United States Institute of Peace and a former diplomat who served as executive director of the bipartisan Iraq Study Group. 'The question is whether the concept, as it was applied, is dead. And it’s absolutely clear to me that you have to talk to who you have to talk to, in order to get things done.'”
Ultimately, pursuing the diplomatic option will benefit both the administration and the Pentagon. Both win when military force is seen for what it is - an absolute, last option.
Posted by The Mound of Sound at 8:28 AM