Paying For Our Own Poison 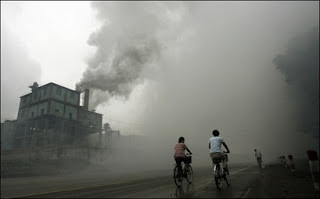 Maybe that's the way we need to look at the coal-fueled world, especially China. We ship our manufacturing jobs over there where they use cheap labour, lax environmental laws and a coal-fired economy to produce cheap goods we then buy. Put another way, we're driving their coal-driven economic miracle.
But it's not just attractively priced Chinese products we're getting out of this. We're also getting the end-products of all of that burned coal and that seems to be hitting us hard just when we least need it.
A team of researchers from Texas A&M university believe that coal soot discharged into the atmosphere by India and China could be responsible for some of the freakish weather we've been experiencing in Canada and the US.
They believe the particulate pollution drifts high over the Pacific where it results in cloud change and more intense storms - the sort that battered Vancouver over the winter. They believe these intense storms will change wind patterns globally.
Renyi Zhang, an atmospheric scientist at A&M, told the Globe:
"'You are probably going to have extreme weather, cold winters or warm winters. I just can't say. The impact needs to be further evaluated,' he said.
"'The bottom line is that if you change the weather in one region you are going to change the weather everywhere and you are going to change the climate, basically.'
"He and his colleagues reached their conclusions using satellite data collected between 1984 and 2005, as well as climate models. He says he knows it is controversial to suggest that winter storms may in part be man-made.
"'First we found the evidence that storms are getting stronger. Second, we believe we have made a link to the pollution in China. People may have different opinions.'
We need to get to the bottom of this - fast. What is the point of paying India and China for their products if it's going to mean also allowing them to deliver meteorological mayhem to our shores? The longer we wait the harder this is going to be to correct. The planet may just not be able to afford the economic miracles of China and India.
Posted by The Mound of Sound at 9:00 AM