As Long as You Confess on Church TV, It's Okay 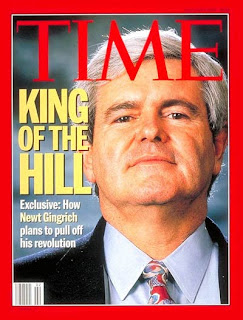 Newt by name, newt by nature. The chrubic little salamander, Newt Gingrich, is testing the waters to see if he'd have a shot at the Republican presidential nomination for 2008.
Gingrich, considered the driving force behind the 1994 Republican sweep of Congress, remains very popular among US conservatives, even those who can keep their pants on.
Newt led the charge to impeach Bill Clinton over the Monica Lewinsky affair. At the time, Repugs were literally gushing with family values indignation, so self-righteous that they spent many times more investigating Clinton than George W. did investigating the 9/11 attacks.
Now before you get into a presidential nomination campaign, common sense dictates that you first clear the decks. You gotta get rid of anything that smells, chuck it over the side, so that one of your rivals won't make you wear it later.
It turns out that Newt, like Clinton, has a problem with his pants. There was the mini-scandal of his first wife who, while beset by cancer, learned that Newt had taken up with another woman. That woman, in fairness, did become Mrs. Newt II. He did clean that mess up - sort of.
Mrs. Newt II held the title from 1981, the end of Newt I, until 2000, the arrival of Mrs. Newt III. That's when it came out that Newt had decided to trade up again, this time to current wife, Callista Bisek, a former congressional aide more than 20 years younger than he is.
Before launching his campaign, King Grinch decided to seek absolution in a TV interview with Focus on the Family founder and fundamentalist uber zealot, James Dobson. The way Newt described it, he was plainly the victim of the whole, sorry business:
''There were times when I was praying and when I felt I was doing things that were wrong. But I was still doing them,'' he said in the interview. ''I look back on those as periods of weakness and periods that I'm ... not proud of."
Oh, c'mon Newt - just a little bit proud, really, eh? You can still score the young'uns.
Posted by The Mound of Sound at 8:24 AM