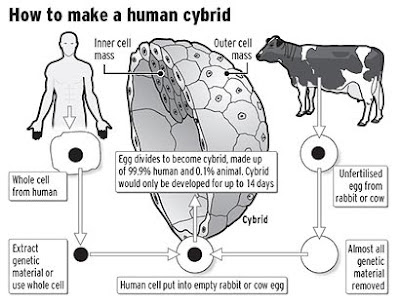 They're called "Cybrids", the product of implanting a human cell into the egg of a cow or rabbit. The result, as shown in The Telegraph diagram above, is an embryonic hybrid that, genetically, is almost entirely human.

Britain has decided to permit its scientists to being experimenting with Cybrids in the quest for "new treatments for diseases such as Alzheimer's, Parkinson's, cystic fibrosis, motor neurone disease and Huntington's."

Cybrids are supposed to be destroyed with fourteen days. This research has expressed concerns that it may go beyond Cybrids and extend to Chimeras, a creature composed from the cells of zygotes of two different species.
Posted by The Mound of Sound at 12:27 PM