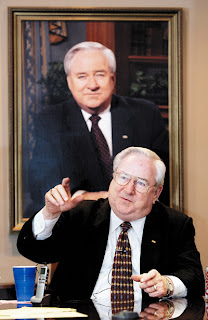 Isn't One Quite Enough?
Hate the sin, love the sinner. Jerry Falwell, hot on the heels of Christain fundamentalist James Dobson, has wasted no time embracing Newt Gingrich.

Gingrich, as you've probably heard, just came clean about screwing around on his second wife during the Clinton impeachment hearings and then taking up with an aide 20-years his junior. That's like the second time the Newtster has pulled that one. However, now that he's considering a run for the Republican presidential nomination, he figured it was a good idea to get this little pecadillo out before he got outed by a rival.

Man, the Christian Right couldn't be happier with the guy. Even Jim Baker and Jimmy Swaggart had to go through a spell of fundamentalist purgatory but not Newt, no sir.

Now the fundamentalists have been going through a bad spell of their own. None of the early Republican candidates were really reliable enough - make that Christian enough - for the religious extremists. John McCain has been trying to turn himself inside out to win the born again backing but he's still not trusted and Rudy Guilliani, well he's a positively unrepentant sinner who is absolutely not to be trusted. Newt, however, there's a man you can deal with and just the guy for the Christian Right.

Oh yeah, back to Falwell. Falwell literally fell over himself to grant Gingrich absolution for his serial sins. No siree, Gingrich, says Falwell, is the real deal, a man redeemed:

"Falwell, in his newsletter, said he has usually been able to tell when a man who has experienced ''moral collapse' was genuinely seeking forgiveness. 'My sense tells me that Mr. Gingrich is such a man,' he wrote."

Now if King Grinch can just get Pat Robertson on side, he'll have the Republican Trifecta. Yes!!!
Posted by The Mound of Sound at 9:14 AM