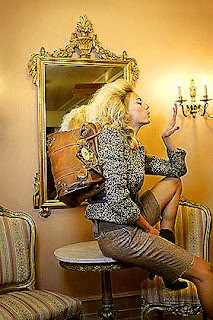 France is not known for fat people. In France, 9 per cent of the population are obese and less than a third are overweight. In North America it's closer to a third obese and two thirds overweight.
It sounds like the French are intent on staying French-like. According to a report in the LA Times, France is introducing health warnings on food packaging:
"Beginning Thursday, the government ordered food ads to carry cautions telling the French to stop snacking, exercise and eat more fruits and vegetables.
"With processed snacks and fast food encroaching on France's tables and culinary traditions, health officials fear the nation's youth face a growing risk of obesity.
"The ad restrictions fly in the face of the image of the trim and cuisine-conscious French, perpetuated by books like Mireille Guiliano's best seller "French Women Don't Get Fat." The book argues that the French can eat croissants and foie gras without ballooning because they take time to savor flavors and eat judiciously.
"But the growth of processed snacks and ready-made meals with high fat, salt and sugar are changing that image.
"And France and the World Health Organization are particularly worried about an obesity epidemic striking the young and bringing future health risks with it, such as diabetes, high blood pressure and heart disease. WHO warns that 20 percent of children across Europe are overweight, their ranks swelling by 400,000 a year.
"Other European countries have already taken measures along the lines of France."
It sounds like a pretty sensible idea, doesn't it?
Posted by The Mound of Sound at 10:10 AM