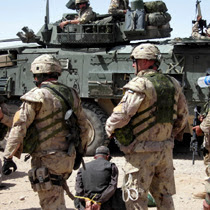 The Independent reports that British commanders are gearing up for what they claim will be the decisive battle for control of Afghanistan. Put simply, the Brits (and NATO) are counting on the Taliban coming out this year, although hopelessly outnumbered and outgunned, and either be destroyed where they stand or mauled so badly that their popular support among the Pashtun people collapses. This, of course, begs the question of whether the Taliban is willing to follow the NATO script.
If the Taliban are simply willing to commit suicide, the Brits' predictions may prove to be right on the money. If the Talib, however, don't want to fight the conventional war, the one where NATO holds all the cards, and instead fight their war, a war of insurgency, then the Brits are wrong. In any insurgency, the decisive year is the final year of the conflict and the odds are 4-1 that turns out to be the year the foreigners pull up stakes and leave.
NATO's Achilles' Heel still lies in the woeful lack of combat boots on the ground. This year they're going to try to clear - and hold - the area around the Kajaki dam to allow the power plant to be repaired. Beyond that, it'll mainly be "search and destroy" type missions, whipping around from place to place, clearing out the bad guys and then leaving and allowing the bad guys to move back in.
I really hope the Taliban are as stupid as NATO is counting on them to be. I hope they get totally trashed this year so that maybe we can just leave the country to the warlords and thugs and drug barons who run the government and get our troops home. I'm hoping and apparently so is NATO.
Posted by The Mound of Sound at 9:40 AM