The Malevolence of the Far Right 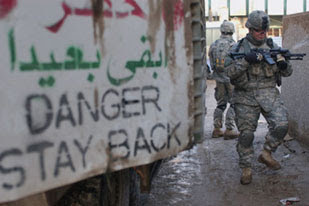 I don't always agree with New York Times columnist Tom Friedman but I have to agree with his take that the Walter Reed hospital scandal is just one manifestation of how George Bush has tried to run the country as though there was no war at all:
"Mr. Bush summoned the country to D-Day and prepared the Army, the military health system, military industries and the American people for the invasion of Grenada.
"From the start, the Bush team has tried to keep the Iraq war 'off the books' both financially and emotionally. As Larry Diamond of Stanford’s Hoover Institution said to me: 'America is not at war. The U.S. Army is at war.' The rest of us are just watching, or just ignoring, while the whole fight is carried on by 150,000 soldiers and their families."
Welcome to the world of the far-right, a world in which you run huge deficits, fight a war on borrowed money and slash taxes for the rich. There is something genuinely pernicious about people like that.
Posted by The Mound of Sound at 8:03 AM