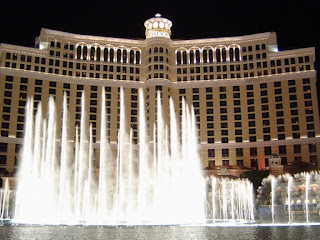 No, it's not a new soft drink, it's what Las Vegas is doing to the rest of the state.
Trying to maintain vast lawns, pools the size of small lakes, fountains and golf courses in a rapidly growing city stuck in the middle of a desert takes a lot of water, a lot more than Las Vegas gets from its 4 inches of annual rainfall.
The city now wants to build a pipeline to drain Nevada aquifers, some 300 miles to the north. Ranchers in that area are less than pleased, especially as they already face shortages from depleted groundwater reservoirs. The city's water commissioner concedes that even the dwindling supply of rural groundwater won't be enough to meet future needs of Las Vegas.
The long term solution, she says, would see Las Vegas pay to build and operate desalination plants along the California or Mexico coast and trade the freshwater from that source for a greater share of the Colorado river flow. Maybe somebody should tell her the Colorado is already under severe stress.

Interesting article.I visit Vegas every year and have seen & played the downtown strip golf course,lake Mead's low watermarks,etc.Vegas is one wonderfull, exiting, great, indulgence 24/7.I have always said that if the world wants a real reason to hate or love Americans,a trip to Vegas would do it.
Just as it is stupid to build citys below sea level (or nations like Holland),it is apparent that building Vegas in the dessert with industry that attracts 40 million + tourists a year was a mistake.But same as New Orleans,Holland,etc you can't move Vegas,and low flow toilets (that you farcically flush 3 times)aren't the answer,nor is a pipeline to another aquifier which will present the same problems in the future.
De-salination plants are used extensivly in the Middle East,and considering the costs is really the only realistic solution for now.Funny thing,I will give up flushing the toilet after each use,will drink imported beer,icecubes & water,but I won't give up Vegas.There is a message there somewhere?