First the "Bush Doctrine", Now This 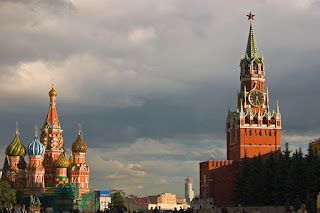 I've written several comments about the quiet arms races underway - in the United States, China, India and even Russia. In no small part, these have been - if not triggered, certain accelerated - by America's unilateralism under George Bush and the infrequently mentioned, bellicose "Bush Doctrine" in conjunction with lesser provocations such as Bush's space doctrine.

George Cheney-Bush has done a great deal of damage to multilateralism and global order. His foreign policy is built on coercive acquiesence ("you're either with us or against us"), not concensus. It is premised on "strength beyond challenge" and not just pre-emptive war but preventative war - war on the pretext of preventing war even if the perceived threat is only "emerging." These are the policies of mad men, something that hasn't gone unnoticed in Beijing and Moscow.

Everybody that matters is going for their guns, strapping on the six-shooters, and, while no one is willing to admit it, they're beginning to mosey on down to the corral.

Now it's Russia's turn. According to The Guardian, Russia is about to unveil a new military doctrine of its own, one that holds NATO and the West as Russia's greatest danger.

In a statement posted on its website, Russia's powerful security council said it no longer considered global terrorism as its biggest danger. Instead, Russia was developing a new national security strategy which reflected changing "geo-political" realities, and the fact that rival military alliances were becoming "stronger" - "especially Nato".

There have been changes in the character of the threat to the military security of Russia. More and more leading world states are seeking to upgrade their national armed forces. The configuration has changed," the council said.

"In particular Russia has been incensed by the US administration's plans to site two new missile interceptor and radar bases in Poland and the Czech Republic.

"Senior figures in the Russian military yesterday told the Guardian they were infuriated by what they regard as Nato's "relentless expansion" into "post-Soviet space" - the countries of former communist eastern Europe and the Baltic. Russia felt increasingly "encircled" by hostile neighbours, they said.

"Yesterday Russia's foreign minister, Sergei Lavrov, said Washington had failed to explain why it wanted to site missile bases on Russia's doorstep. President Putin has ridiculed the US claim that the bases are designed to shoot down rogue missiles from Iran or North Korea, claiming their real target is Russia's nuclear arsenal.

"'We have been discussing this issue with our American colleagues. But most of our questions have remained without coherent answers,' Mr Lavrov said.

"The chairman of Russia's academy of military science, Mahmoud Garayev, said Russia could no longer afford to ignore the threat from Nato. Drugs and terrorism were an irrelevance, he said."

It's not as though no once could've seen this coming. George H.W. Bush presided over the end of the Cold War. His Frat Boy kid may have just brought Cold War back from the grave.
Posted by The Mound of Sound at 8:18 AM