Got Pain? Toke Up! 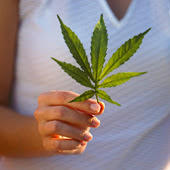 The medical journal Neurology has published a study that is being hailed as conclusive proof that marijuana is a valuable pain reliever.
The study focuses on peripheral neuropathy, a condition that results in severe pain. Neuropathic pain in HIV patients is similar to the type of pain experienced from many other illnesses including diabetes and multiple sclerosis.
Writing in the Boston Globe, Lester Greenspoon, says the study merely reinforces what's been known all along:
"Neuropathic pain is notoriously resistant to treatment with conventional pain drugs. Even powerful and addictive narcotics like morphine and OxyContin often provide little relief. This study leaves no doubt that marijuana can safely ease this type of pain.
"As all marijuana research in the United States must be, the new study was conducted with government-supplied marijuana of notoriously poor quality. So it probably underestimated the potential benefit.
"In the 19th century it became a well-established Western medicine whose versatility and safety were unquestioned. From 1840 to 1900, American and European medical journals published over 100 papers on the therapeutic uses of marijuana, also known as cannabis.
"Our knowledge has advanced greatly over the years. Scientists have identified over 60 unique constituents in marijuana, called cannabinoids, and we have learned much about how they work. We have also learned that our own bodies produce similar chemicals, called endocannabinoids.
"The mountain of accumulated anecdotal evidence that pointed the way to the present and other clinical studies also strongly suggests there are a number of other devastating disorders and symptoms for which marijuana has been used for centuries.
"While few such studies have so far been completed, all have lent weight to what medicine already knew but had largely forgotten or ignored: Marijuana is effective at relieving nausea and vomiting, spasticity, appetite loss, certain types of pain and other debilitating symptoms. And it is extraordinarily safe — safer than most medicines prescribed every day.
"If marijuana were a new discovery rather than a well-known substance carrying cultural and political baggage, it would be hailed as a wonder drug."
Posted by The Mound of Sound at 11:20 AM