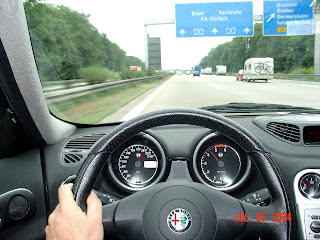 Germany and the autobahns. They can seem almost inseparable and that's just the way most German leaders want to keep it.
Officials of other EU nations have ruffled German feathers by urging the imposition of speed limits on the autobahns. Up till now, speed on the autobahn has been pretty much regulated by the person behind the wheel and the horsepower under the hood.
A spokesman for the German transport ministry claims to have a study showing that a 100 km/hr speed limit would reduce GHG emissions by only 0.6%. Still, polls have shown growing support among the German people for speed limits to reduce GHG emissions.
Posted by The Mound of Sound at 11:34 AM