Is Alberto Gonzales a Marked Man? 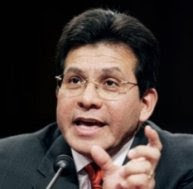 George Bush's controversial Attorney General, Alberto Gonzales, has to be feeling the heat. With Scooter Libby convicted of perjury and obstruction of justice and with a Democratic Congress happily exercising their power to drag folks in under subpoena to tell it all - under oath - the US administration has become surprisingly co-operative these days.
Despite all the talk about how the Dems are stumbling, their key to victory in '08 is to use little pieces of paper to rip the lid off the past six years of chicanery by the White House and its compliant, Republican Congress. There is much, much to expose and weasels like Gonzales can see the writing on the wall.
At the moment he's on the hot seat over the firings of 8 federal prosecutors. It was something that wouldn't have risen to the level of a belch while the White House was able to rule in secrecy but it's now grown into quite a scandal. What the Dems are eager to show is how the Bushies perverted the nation's justice system to serve their own, partisan ends.
What's at issue is whether the eight prosecutors were fired because they were instrumental in going after Republicans. The flip side to that is whether the other prosecutors, those still safe in their jobs, used their positions to unjustly derail Democrats, especially at election time.
There have been plenty of accounts of investigations announced against Democratic candidates in the midst of election campaigns, investigations that mysteriously evaporated once the polls closed. Does that smack of vote fraud by the justice system itself? Yeah, it does.
When this scandal first surfaced, Gonzales told Congress it was an "overblown personnel matter." He claimed the dismissals were the result of poor performance by the prosecutors affected. It didn't take long to show that was completely untrue. Now the whole business has been tied directly to the White House and Karl Rove.
Bush and his gang have persistently abused their powers since the day they took office in 2001 and they reigned for six years in a state of blissful hubris. Now the Dems, with their little pieces of paper, are about to put that abuse, and the guy who ruled like a monarch, on trial.
Posted by The Mound of Sound at 9:54 AM