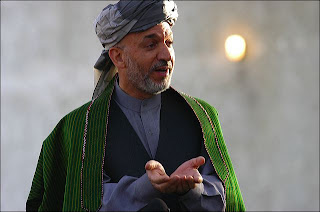 Everyone knows the government of Afghanistan and its security services are crippled by widespread corruption. It's one of the main factors driving ordinary Afghans to support the Taliban insurgency. Afghan president, Hamid Karzai, takes the problem so seriously that he has appointed a boyhood friend to be the country's anti-corruption czar. Just one glitch - the guy is a convicted dope dealer. From The Independent:

"Afghanistan's new anti-corruption chief has a shady past. Izzatullah Wasifi served nearly four years in a US prison for trying to sell heroin to an undercover agent in Las Vegas for $65,000.
It is not the ideal CV for a man appointed to root out corruption in the country that is overwhelmingly the world's biggest supplier of opium, from which heroin in refined.
"Mr Wasifi's past came out after an investigation by the Associated Press, which pieced the story together from court records. They revealed that in 1987, Mr Wasifi was arrested at Caesar's Palace Hotel.
"Identifying himself only as Mr E, he tried to exchange a bag containing a pound and a half of heroin for $65,000 (£34,000) in cash, unaware the "customer" was a policeman. Mr Wasifi was released on parole after three years and eight months.
"The government of President Hamid Karzai has refused to say whether it knew about the drugs conviction when Mr Wasifi was appointed to his post two months ago. A childhood friend of Mr Karzai, today he heads an anti-corruption office of 84 people."
Posted by The Mound of Sound at 8:24 AM