The Petulant Megalomaniac of 24 Sussex Drive 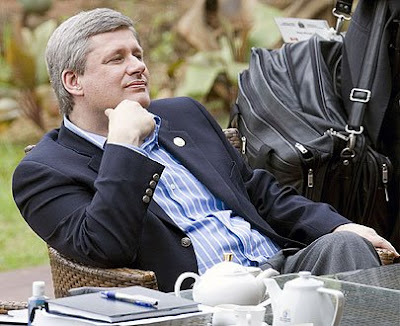 Now admittedly, this did come from today's Toronto Star but it does have a ring of truth, a scent of reality in revealing the true face of our Furious Leader. And it explains why he often can seem to so closely resemble George w. Bush minus the goofy sense of humour:

"He just can't help himself."

So says one of Stephen Harper's long-time acquaintances, wryly noting the Prime Minister has few friends.

No less a political sage than former Progressive Conservative prime minister Brian Mulroney has privately told at least two of his vast network of friends that he is disappointed in the man who was briefly his protegé.

"There's always been this concern that Harper believes he's the smartest guy in the room and that, no matter what, he's never wrong," confides the Harper acquaintance (who's also a Mulroney friend).

In interviews with federal associates of Harper, past and present, a picture emerges of a bright and driven man who does not take dissenting counsel especially well and is prone to profane outbursts.

"The people around him, the stable, has generally been bred for obedience, so that's what you get," says a confrere.

Another insider agrees "there's no question the Prime Minister rules by fear," which is not always productive.

It was Harper who insisted that the Nov. 27 economic statement be used as a political weapon to bludgeon the Conservatives' foes.

But inside and outside the party, Harper was being blamed for precipitating the storm.

"It's not that he's never made mistakes before. He actually has made a number of them, but ... there's always been handy staff to blame it on," says a Tory.

"The big difference here is that the big flaming pile of s--- is squarely ... at his doorstep."

He has displayed that almost adolescent blend of petulance and stubbornness before in his political life.

Instead of immediately retracting and apologizing for the over-the-top attack, Harper stuck to his guns.

...even though he bought his government time until Jan. 26, his loyalists worry that he has done himself irreparable harm.

"He truly is ... politically brilliant, but he's also pathologically partisan. So he just can't help himself. It's a deadly combination. You know that you're a smart guy and you're pretty sure you can outsmart everybody and you never miss an opportunity to poke an opponent in the eye," says an insider.

The fallout within the Prime Minister's Office has not been pretty.

"He is a yeller and certainly longshoremen could take language lessons from him. The backrooms are blue but it's not cigar smoke; it's four-letter words," says a Tory.

"I'm sure this is killing him in some ways. If he doesn't turn it around, if he doesn't pull it out of the fire then ... he goes down rivalling Joe Clark for the biggest boneheaded move in Canadian history."

Still, the fact that so many Conservatives would speak out about Harper only if their identities were protected is telling.

Now that he is close to the edge, how do we poke him in just the right way so he has a potty mouthed hissy fit in front of so many cameras the media can't ignore it?

Great post. I think the public is seeing more of the truth. We just need to keep playing this angle. We have to make it clear that Harper is the problem, but, BUT, not forget to criticize the lack of Conservative policy or skills to deal with the economic frame we are in...

Luckily for Harper, the Libs have Dion, Rae, and Iggy.

I agree. Harper's character flaws are a serious form of dysfunction. When your adversary has that magnitude of personality disorder it needs to be understood and very effectively exploited. Harper relies on raw instinct rather than intellect and it has served him well, more often than not, but his instincts are vulnerable to his emotional imbalance that leaves him isolated even among his own supporters. This sort of character has been seen before and brought down hard. It would certainly be worthwhile to revisit the history of Harpers past.