I Never Thought I'd Live To See The Day 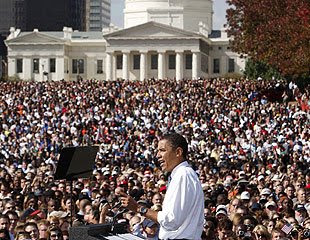 I never thought I'd live to see the day that a leader of the Liberal Party would stand to the right of an American president.

Obama is progressive. Ignatieff is a poseur.

Obama opposed the invasion of Iraq from the outset. Ignatieff endorsed it even though he had to know it was a total violation of international law.

Ignatieff condemns Hamas and excuses Israel entirely of any blame for the deaths it has caused in Gaza. Obama plans to open low-level communications with Hamas.

Once again Ignatieff is on the Harper/Bush side on Canadian foreign policy.

I guess Stephen Harper knew what he was saying when he claimed Canada is moving to the right. I didn't realize he'd be getting so much help from Michael Ignatieff.
Posted by The Mound of Sound at 10:18 AM

Obama is progressive. Ignatieff is a poseur.
A morally bankrupt poseur at that...

I wonder if Cherniak has a little stiffy now that "his" Liberals are lockstep behind Harper...
And given some of the Libloggers, they are not far removed from the BoringTories... maybe they should merge..