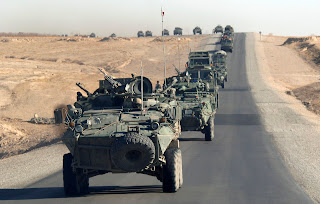 If the past eight years have taught us anything, it's that our military commanders in Afghanistan have been consistently unduly optimistic. That makes it really hard to believe American commander, Maj-Gen Michael Tucker, when he announced that our side is now in a 'stalemate' with the insurgents in the key battlefield regions of southern Afghanistan.

The problem is that, even if General Tucker is totally accurate, we're losing badly. Why? Because in this type of warfare, time is not on our side and we've squandered eight years - far more time than we ever really had - to arrive at a stalemate.

The general alluded to this when he said that a surge of foreign troops isn't really going to make much difference. From CBC News:

Asked if that would suffice, Tucker said it should because "you can only put so many foreign troops in Afghanistan." He is the deputy chief of staff for American military operations in Afghanistan.

"This country does not - they're somewhat xenophobic in that regard," Tucker said. "They don't necessarily like to have a lot of foreign troops. And so we think what we have is enough to get the job done as efficiently and as quickly as possible without breaking through some of those thresholds that they have."

When the population turns xenophobic about foreign troops in their land to the point that you're pushing their thresholds of tolerance, you've lost the political war, the only war the Taliban are interested in winning, the only war they need to win to claim eventual victory. More troops would allow you to escalate and expand the military war, the one we've been fighting since we arrived eight years ago, but that won't decide the issue except to decide it against you.

What a godawful mess.
Posted by The Mound of Sound at 8:13 AM