Cry Me a River, You Saudi Despots 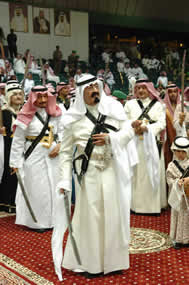 The poor, poor House of Saud is dusting off the old begging bowl. That's right, they're pleading hardship and blending it with some sort of moral imperative that we come to their aid. From Reuters:

United Nations climate talks threaten Saudi Arabia's economic survival and the kingdom wants support for any shift from fossil fuels to other energy sources such as solar power, its lead climate negotiator said.

Contrasting interests of different countries are challenging faltering climate talks, meant to forge by December a new global deal in Copenhagen to curb man-made climate change.
Small island states say their survival is threatened by rising seas. But Saudi Arabia, the world's biggest oil exporter, says it could suffer from any pact which curbs oil demand by penalizing carbon emissions.

"It's a matter of survival for us, also. So we are among the most vulnerable countries, economically," Mohammad Al Sabban told Reuters on the fringes of talks which end on Wednesday, after the latest in a series of meetings meant to thrash out a deal to replace or extend the Kyoto Protocol after 2012.

So, let's get this straight. Saudi Arabia, with its history of unfathomable oil wealth, thinks the West owes it something if we ditch fossil fuels. Hmm, maybe if they'd stop spending all those millions funding Islamist extremists abroad they'd have more in the treasury to fund alternative energy programmes of their own - solar panels for example.
Posted by The Mound of Sound at 9:49 AM

Instead of raising output (which would have lowered prices)to assist consumers the world over, they lowered their production output instead.

I have never ever read anything that has turned my stomach as much as this article did. Maybe Saud ought to auction off his solid silver car and some of the house's other extreme wealth. A. Morris

In a word. Diversify.