Another Step Backward for Canadian Society 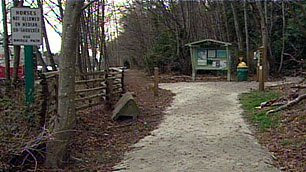 If, while jogging down a forest trail, you run into a menacing, psychotic-looking stranger who starts running after you, don't wait until after someone else is murdered there to notify the authorities.

Wendy Ladner-Beaudry might well be alive today if any of the three witnesses who earlier encountered a scary stranger at the very murder scene had notified the cops. The three came forward as callers to a CBC radio on line programme discussing the case and the safety of the Spirit Regional Park near the University of British Columbia. If there were three witnesses who called a radio show, how many others must have seen this guy and also did nothing about it?

"We were chased by a man who initially was just hanging around near a trail intersection," said a caller who didn't want to be named.

"As soon as we went by the intersection and turned deeper into the woods, he went pounding after us," she said.

Another caller said she was walking through the park two days before the homicide and crossed paths with a man near the same spot where Ladner-Beaudry's body was found.
She said the man looked at her with a "chilling, almost psychotic expression" that left her shaken.

She said the encounter was so disturbing she reported it to police two days after news of the homicide was reported in the media.

With citizens this responsible I guess it's not surprising that the Vancouver Police still haven't come up with a suspect in the killing. As a society are we becoming so insular, so disengaged that we're losing the collective power to protect ourselves?
Posted by The Mound of Sound at 9:13 AM

Mound:
This is WAY off topic and sorry, but I'm surprised you've had nothing to say about Louise Arbour and Eric Hoskins as key note speakers at the LPC convention.

For all your criticisms of the party of late, you must be pleasantly surprised by this no?

Mike, I think it's terrific. Arbour, as you probably know, has always been my favourite to lead the LPC. Now, if we can just pry her away from the International Crisis Group. I think she's exactly what this party and this country needs right now.

Well four years ago, some Liberals were saying as Michael Ignatieff was slotted by keynote speaker in 2005 (as Arbour is now) "if only we could lure Michael Ignatieff away from teh Carr Centre for Human Rights at Harvard. I think he's exactly waht this party and this country needs right now".

You might take issue with whether those comments are accurate, but look where he is now, Arbour is following exactly in the footsteps Ignatieff did and finds herself in a very similar situation to what Ignatieff did in 2005.