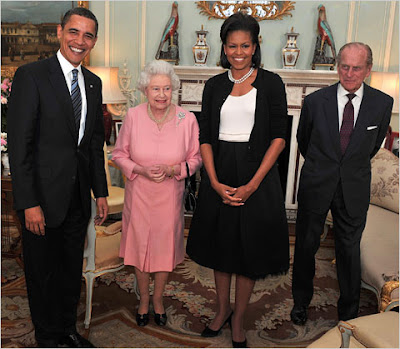 Mrs. Obama clearly made an impression with the 82-year-old monarch — so much that the smiling queen strayed slightly from protocol and briefly wrapped her arm around the first lady in a rare public show of affection.

It was the first time Mrs. Obama — who is nearly a foot taller — had met the queen. The first lady also wrapped her arm around the monarch's shoulder and back.

A Buckingham Palace spokesman who asked not to be identified because of palace policy said he could not remember the last time the queen had displayed such public affection with a first lady or dignitary.
http://www.google.com/hostednews/ap/article/ALeqM5iU2_BrNBSIf8q7Dpe7TZaCq11qeAD97AFO700
Posted by The Mound of Sound at 1:58 PM