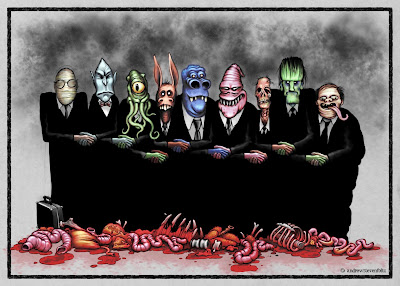 We pay a lot of attention to certain victims of the global recession - Third Worlders who are seeing their rise out of poverty dramatically reversed, autoworkers who have to watch as their job security evaporates, the list goes on. But who ever gives a fig about lawyers and the really dire straits befalling them? According to the New York Times, the legal profession is taking a hammering:

The economic downturn is hitting the legal world hard. American Lawyer is calling it “the fire this time” and warning that big firms may be hurtling toward “a paradigm-shifting, blood-in-the-suites” future. The Law Shucks blog has a “layoff tracker,” and it is grim reading. Top firms are rapidly thinning their ranks, and several — including Heller Ehrman, a venerable 500-plus-lawyer firm founded in 1890 — have closed.

The employment pains of the legal elite may not elicit a lot of sympathy in the broader context of the recession, but a lot of hard-working lawyers have been blindsided, including young associates who are suddenly finding themselves with six-figure student-loan debts and no source of income.


Read more of the desperate plight of the legal profession here:

Email ThisBlogThis!Share to TwitterShare to FacebookShare to Pinterest
Labels: law

It is my humble opinion that we have trained too many lawyers. That has created an atmosphere requiring them to be inventive in generating income.

Maybe a few less wouldn't be such a bad thing.

I have long advocated just that. It is no good for the public or the profession when there is a surfeit of practising lawyers.

There was a day when a young lawyer, even after being called to the bar, would spend a few years junioring seasoned counsel - extended on the job training. There was generally much to be learned from these senior lawyers.

When we began to develop a glut of graduates, firms didn't keep on a lot of them, forcing these young, inexperienced lawyers to either get out of the business or set up on their own and wing it.

In the ordered regime there was a cardinal rule that you never took on a case in which you lacked the necessary knowledge or experience. No working above your pay grade idea.

The curse of many young lawyers setting up on their own is that they were pressured from both directions - no established clientel but plenty of overhead - rent, support staff, equipment leases, law society fees and insurance, etc. That left some of them dependent on taking whatever walked through the door whether it was beyond them or not. It certainly led to some botched litigation and subsequent negligence suits and insurance claims - sometimes ever worse.

Universities are dead keen on acquiring and holding on to professional schools - medicine, law, architecture, engineering and so on. In addition to the prestige, they rake in a lot of government grants. However the root cause of too many lawyers is too many law schools. Those unnecessary law schools, in turn, squander a lot of education funding.

We constantly complain in Canada about a chronic shortage of doctors. I believe we'd do just fine to close one law school out of three and apply those funds to opening new medical faculties. Two or three extra medical schools could go a long way to relieving our doctor shortage.

As I live in a Province that has an acute shortage of Doctors, I would be an instant supporter of that plan. When I moved back here, after an absence of 16 years, I was amazed at how difficult it had become to get a GP. The waiting list was approx. a year.

When I left, you could change Doctors easily if you didn't care for the one you had.

Lawyers on the other hand, increased dramatically. Especially after the opening of a Law Dept. at U de Moncton. That created quite an elbowing match for choice pickings.

It's a shame really that with so many smart and deserving people out there that not all of them will get the chance to practice in the profession of their choice.

I was lucky enough to get into law school on my first attempt, largely due to the fact that I am bilingual, but a unilingual friend of mine with good grades did not get in until just recently (his second attempt).

Still, reality must set in and we have to realize that lawyers need to control our own numbers or things will become as out of control as they are south of the border. It sucks, but there you have it.

"It's a shame really that with so many smart and deserving people out there that not all of them will get the chance to practice in the profession of their choice."

You're right, Fish. There is such an enormous pool of candidates with both the qualifications and desire to become good doctors, doctors this country so badly needs, who'll never get in because the limited number of medical schools prevent the training of an adequate supply of physicians.

And don't lie to me, Fish. I saw your picture. You skated into law school on your good looks and a weak-willed old gal in the admissions office.

I've met a few weak willed gals in my day, but it never brought any favors my way. A few trips to family court though.

My nephew had scholarships coming out of his yinger, and was top of his high school grad class, but was turned down at two med schools. He became a Vet instead. Now he's studying in Boston to be a Prof. Will likely stay in the US too.