Why Is Mulroney Such a Burr Under Harper's Saddle? 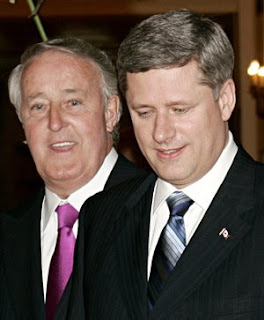 By all accounts it's a good thing we don't let Tory MPs and Senators carry knives or there would have been blood all over the lawns of Parliament when the subject of Brian Mulroney came up at their Conservative caucus meeting last week.

The Tories are split into two camps. One wants to shun the former pm who delivered their party two consecutive and massive majorities. The other side stubbornly insists on defending Brian as one of the flock. The Mulroney supporters appear to be defying Steve Harper's command that Mulroney be 'disappeared' from the party. According to the G&M, Harper has ordered all members of his government, including Mulroney friends, to sever all ties with his predecessor. The only thing Harper hasn't done is declare Mulroney a terrorist.

Steve is acting like a politician in full panic. He plainly sees his former mentor as lethally toxic to his government. Why? Harper must know something is coming Mulroney's way, probably in the Oliphant inquiry. Does Karlheinz Schreiber really have the goods on Mulroney, some smoking gun? Is there some aspect of the Mulroney business that could actually harm the Harper government?

Something is afoot here that's not being explained, at least not to the public. It's said that Karlheinz Schreiber is the next witness scheduled to testify at the inquiry. If there are to be any bombshells they'll probably be launched by Schreiber.
Posted by The Mound of Sound at 10:22 AM