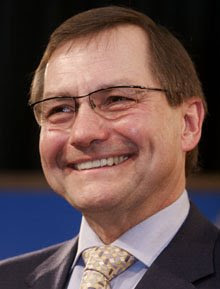 Ed Stelmach and Steve Harper both know how to govern - when they're awash in cash. What neither of them understood was that the good days don't last so you use them to prepare for the bad days to come.

When the RCMP installed Steve as prime monster he got more than a bigger, free house. He got a government with a balance budget and hefty surpluses. The first thing Steve did was get rid of those safety net surpluses. He trimmed two cents off the GST. Steve must've been looking down when he did that because he sure didn't see what was coming.

Special Ed Stelmach has just announced that the bestest, richest province in the whole damn country has fallen on its arse to the tune of a $4.7 billion deficit this year. Edward the Dim thought that he could go through Alberta's windfall because, after all, what could possibly happen to the world's dirtiest, most expensive oil? Dumb and Dumber, all in the same body.

When I saw pictures of Ed in the past I always had this urge to sort of pat him on the head and tell him to go outside to play. Now Ed's turned that goofy smile upside down. Apparently it has something to do with a $6.4-billion drop in oil revenues. So smokes are going up - three bucks a carton - and beer will cost an extra $1.30 a dozen. Worse yet, if you need a visit to the chiropractor or sex-change surgery (they aren't the same thing?) you're on your own.

It's tough Ed but, as Steve says, who could've seen it coming? I mean it's not like Alberta has gone through this before - is it?
Posted by The Mound of Sound at 2:56 PM