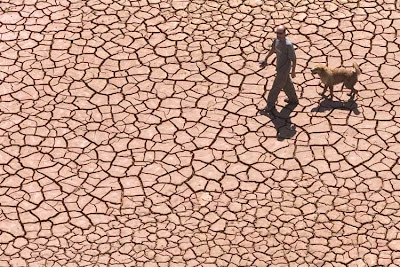 Forget all the other manmade plagues - deforestation, desertification, resource exhaustion, species extinction and so on. Just focus on global warming. So what's really in store for our kids and our grandkids and our great-grandkids? It depends who you ask except that it really doesn't. It's not what an alarmist will tell you nor is it what a global warming denialist will tell you. In situations like these I like to place some confidence in people I consider generally reliable and one of those is Gwynne Dyer.

Mr. Dyer holds a doctorate in war studies from the University of London. He has held academic positions at the Royal Military Academy, Sandhurst and at Oxford University. He sits on the Board of Governors of Canada's Royal Military College. Born in Newfoundland, he's served as an officer with the navies of Canada, the United States and Britain. He's not what anyone would call a screaming, left-wing nutjob.

Dr. Dyer gave an address on Saturday in the BC Interior in which he laid out dire predictions for the human race unless we quickly take drastic action to fight global warming (are you listening Mr. Ignatieff?). From the Arrow Lakes News:

“At 4.5 to six degrees warmer average temperature the world’s remaining agriculture will be able to support 0.5 to one billion people. The remaining eight or so billion people around in 40 years will have to die,” he said. “What happens in the next 40 years is bad. What happens in the next 100 is not survivable for 90 per cent of the population. Countries that can’t feed themselves will not be able to buy themselves out of trouble, even if they have the money.”

In his research, Dyer came to four conclusions: climate change is real and coming quicker than people expect; the impact of climate change will cause massive global sociopolitical upheaval and war; there is a tipping point, two degrees Celsius increase in global average temperature, and “we’re going to blow right through it”; and there are ways to “cheat” and temporarily reduce global temperature to give humanity more time to reduce greenhouse gas emissions.
Political leaders today are writing the obituaries of the great mass of humanity, the billions upon billions, who will be dying off in four decades from now. That includes political leaders who believe that environmentally catastrophic ventures like the Tar Sands can be Canada's best hope for the future throughout the 21st century. We ought to have an institution on Ellesmere Island to hold people with that sort of mentality because they're far too dangerous to be allowed to roam freely among us.
Read more here:

http://www.bclocalnews.com/kootenay_rockies/arrowlakesnews/lifestyles/42937227.html
Posted by The Mound of Sound at 1:04 PM

What can I say except to say, I'm afraid Dyer is absolutely correct. South Korea is a prime example of "head in a tunnel" regarding the environment in which they live. I've been given the sad news that I have lung desease as a result of breathing air pollution. There are those who will say, "why did you go there". The answer....to find work in my field, that's why. That's another problem in Canada...not enough sustainable work for just 33.3 million people. What a mess when Canada could be setting an example. A. Morris

Oh, we're setting an example alright, A.M. Small comfort that Canada and Siberia are flagged to be the only two places that stand to benefit from all this. Of course, once those 8-billion folks who don't really want to die figure out that we've got just what everyone of them needs, we're going to be in a lot of peoples' crosshairs. Then again, I'm sure the Americans will be willing to share our bounty with us just as soon as we sign on the dotted line.

MOS...is that why Harper is pulling off dictatorship, so we don't figure out what is going to happen? Thank goodness some of us are on the ball. I bet even Newfoundland will suddenly become a new found haven....smile!! Cheers, A. Morris

Dyer's climate wars series on CBC's Ideas is well worth a listen for those interested in more.

Thanks for the link Dan. Highly informative.