In Defence of Obama on Torture 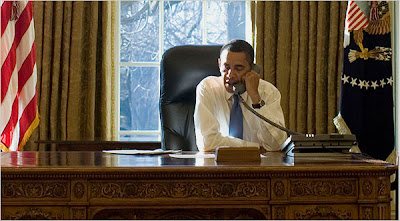 Barack Obama has stirred up a hornet's nest of angry indignation from the left over his decision not to prosecute CIA officers who tortured terrorism suspects.

I think he is right.

It's a facet of 'victor's justice' that the only people ever prosecuted for following orders are those from the vanquished's side. The other side doesn't prosecute its own people because that calls into question the very legitimacy of the state and the chain of command. That's not to say there should be no prosecutions. To the contrary, you prosecute not those who carried out the orders but those in authority who issued the orders.

Obama has said he's not going to prosecute the CIA officers who did the dirty deeds. He has not said that he won't be calling to account those who aithorized and directed these crimes.

I suspect he's cognizant of the risks of taking on too many challenges all at once. He's put an end to torture. That, for now, ought to be enough. Dealing with Gonzales, Feith, Rumsfeld and perhaps even Cheney can wait until the immediate crises confronting America and the Obama White House are under control.

When you prosecute the little guys it paves the way for scapegoating and cover-up. That's a common tactic of the right. It's what they did at My Lai and what they did at Abu Ghraib. They used the proles as whipping boys while the real criminals, the directing minds, drifted back into the safety of obscurity.
Posted by The Mound of Sound at 12:05 PM

So, if I steal a car, can I tell the cop "It is not a time for retribution, it is a time for healing"? I bet the cop will be really impressed.

Oh and Btw, Obama's people flooded the Sunday talk shows to reassure the big wigs in the Bush Administration that they are safe, too.

If Obama officially absolves the guys who authorized and directed these crimes, then I'm with you.

The CIA operatives involved in torture are the small fry. The big boys who are really responsible might still suffer consequences.

They had damn well better!

A question: Canadian law has a (seldom-used, but still possible) provision for private prosecution. Does the U.S. have anything similar?

I kind of doubt it Joan. Surely by now the ACLU or some similar organization would have pursued prosecution were that remedy available. If Obama doesn't act, however, one or more foreign states could indict and seek the extradition of these scoundrels. Torture is an internationally recognized human rights crime.

I'm sure Washington wouldn't recognize a foreign court's jurisidiction over an American citizen but it does brand them outlaws who thereafter can't freely travel to any of several nations where they would be arrested and extradited to stand trial. As I understand it, Henry Kissinger's freedom to travel is reined in by the prospect of prosecution for his involvement in the coup that toppled Chile's Allende and the murder of civilians afterward by the Pinochet regime.

The ACLU seems to agree with you:
"And, it would be a mistake to read President Obama and Attorney General Holder’s comments regarding immunity too broadly. We don’t think their comments rule out an investigation into torture and abuse, and where warranted, criminal prosecution of those who authorized this abuse (both the lawyers who wrote the legal opinions and the members of the Bush administration who commissioned the memos – collectively, architects of the torture program).
http://blog.aclu.org/2009/04/17/the-morning-after-the-memos/#more-5038"

That being said, the Justice Department is supplying Yoo with several government lawyers to defend himself in federal court in San Francisco.
http://blog.wired.com/27bstroke6/2009/02/analysis-dilemm.html

Not quite sure what to think here.

That is why the initiatives to prosecute are so important.

We are doing it little by little. The IDF sent lawyers into Gaza with the troops to reassure them when they thought they might be committing war crimes. Hard to say that it “worked.”

Even Ariel Sharon was reported to be reluctant to travel in jurisdictions like Spain and Belgium.

1)It overthrows the so-called Nuremburg Principle that “following orders” is not a defense. In the Sound Mound's scheme, following orders would be the main defense. Nice work if you can get it.

Would we be trading the Nuremburg Principle? For what? This is what everyone knows about genocide, war crimes and crimes against humanity. What would we be getting if we agreed to dispense with it?

2)Going after the decision makers and leaving the field-level operatives to do what they like is a strategy that is similar in its broad outline and some of its inner dynamics to the tactic of going easy on marijuana users and reserving the inconvenience of incarceration for the growers, dealers and Big Fish. This is called “decriminalizing marijuana.”

Obama is right; the US is not the place to try the Bush criminals. Conflict of interest will prevent justice and deliver, at the most, a rebuke, a black mark.

Other similar in requiring outside (international) jurisdiction: aboriginal claims to land, self-determination, culture; war refusers; regulation of professional groups such as police and military, but also including teachers, doctors, lawyers, engineers, etc.

Tactically all the Mound of Sound proposal changes the direction the buck is passed. However if we want to catch the bad guys, we have to chase them at both ends and trap them in the middle. The guys who give the orders are guilty; the guys who carry out war crimes are war criminals too. If the whole chain of command is rotten, pull it out the way Canada did with the Airborne Regiment.

Mound of Sound deserves full marks for trying to think outside the box. However, in this case, I suspect he has picked up a piece of sensitive dreck from the aristocrats among his Liberal pals.

No doubt the Mulroney-Schreiber affair has them wanting to be sure that no PM ever has to give a full pubic accounting of the truth while being subjected to the resources of a court—the big-time sanctions against contempt and perjury, the power to subpoena and cross-examine, etc.

War criminals waiting in the wings, regardless of their rank would no doubt prefer Richard Nixon's version of royal infallibility, the Divine Right of Presidents, the principle that anything a president does while in office is legal. We'd get more principled justice from The Mob. We get a keener understanding of fair play from Don Cherry.

Unfortunately, Jim, your suggestions don't work in the real world. Victor's justice married to American exceptionalism is simply too powerful a reality, even for Obama.

In my time in the Canadian military we were taught that it is not illegal to disobey an illegal order but heaven help you if you were wrong. It's sort of like crossing a freeway blindfolded.

Bear in mind that this is a country where you have people like George Will rally to the defence of these miscreants, vouchsafing their honour and good intentions. Once you have a large segment of your population, from the top on down, wanting to dismiss this as an "oopsie" attempting to punish could readily backfire.

The United States has a rich history of state illegality and the American people have rarely shown themselves unwilling to quietly look the other way.

Is this cynical, hypocritical, a travesty of justice? Yes, of course. And your next point is?

That was not my point at all. My only point is that the prosecutions should include those who bayonet the pregnant womb and those who give the order or who allow the practise to continue.

My military experience was in the US. My Lai made me realize that we had actually been trained to commit atrocities. The method was simple: use veterans of the conflict to train us. There was no paper trail, no order given. After a particular exercise, we were told by one of the E-3 sergeants that, had this thing occurred in a real "friendly" village, we would have killed everyone and burnt it to the ground.

Grassroots genocide. We don't need to de-criminalize it in the real world or anywhere else.

I can certainly understand your point Jim but I think you have to start at the top first.

People at the bottom need to have confidence in the legitimacy of the orders that come down on high. Those on high, likewise, must publicly define the parameters of acceptable conduct and lawful orders.

If I'm flying an F-16 and about to drop a 2,000 pound bomb on a mud walled compound in a village in Afghanistan and experience has shown that there's a very good likelihood my bomb will kill innocents, including women and children, is that airstrike really different than how you define "grassroots genocide"?

Where do you draw the line? Civilians, innocents invariably die in wars. We may regret their deaths or at least not want to kill them but we fire our weapons anyway, knowing those civilians will be killed - by us.

What's worse, the guy who waterboards a suspected terrorist or the guy who sends a 2,000 pound gift to the wedding party?

Jim, we're still attacking friendly villages. We do that week in and week out. We do that because we've chosen to wage war on the cheap with a small fraction of the minimum requisite force that leaves us no choice but to rely on excessive, modern firepower. If we'd sent enough troops to secure the village, to keep the insurgents out, we wouldn't be having to drop bombs on those kids.