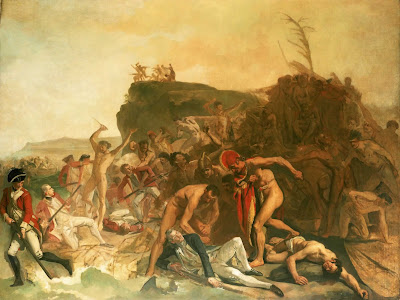 A very important skill in the 18th century was the ability to discern that point when the natives realized we white folks were only humans, just like them. That was always a decisive moment that forever altered social, political, economic and sometimes even military relationships. When a bunch of people think you're a god, a snap of the fingers or a barked command can produce wonderful results. When those people see you as just another mortal, not so much.

We're witnessing that shifting dynamic being played out again in the course of the global meltdown. In the postwar era, most of the Third World and developing world took its economic marching orders from those super bright white guys we call the West, especially the biggest and strongest and richest of those super bright white guys, the United States. And then along came the global meltdown and a look under the carpet where the US had swept its subprime mortgage derivatives and its credit default swaps. That was one of 'those moments' of awakening.

The run-up to the G-20 meeting has been interesting and colorful. President Lula Da Silva of Brazil declared that "this crisis was caused by the irrational behavior of white people with blue eyes, who before the crisis appeared to know everything and now demonstrate that they know nothing." His full remarks made it clear that he was not promoting biological race theories but calling attention to the injustice that the vast majority of the world, who happen to be both poor and non-white, should suffer for the greed and stupidity of a few. China also let loose with an uncharacteristic broadside against the United States, basically saying that we (the Chinese) have gotten our act together and are mobilizing massive resources internally to counter the downturn; now how about you clowns who made this mess step up to the plate, before we take more losses on your stinking treasury bonds? It was worded somewhat less rudely, but still a stunning departure from the "hide brilliance, cherish obscurity" motto that has guided Chinese foreign policy.

... U.S. leadership is taking an immediate hit because it was at the forefront in creating the current world recession. It's hard to believe that Nicolas Sarkozy won the presidency of France barely two years ago by promising to make French capitalism more like the American brand. The idea that the "American model" was superior in economic terms has been promoted for years by the European press even though the statistical evidence has always been weak or non-existent (e.g. France has a productivity level about the same as the United States). But from now on these ideas will be a much harder sell.

You really can't blame them for their anger. For decades 'we've' been using the International Monetary Fund like some sort of travelling Bible show for these 3rd Worlders, always ready to preach our gospel of fiscal responsibility and economic prudence which usually took the form of IMF loans in exchange for often painful compliance to our dictates. For a few million dollars here or there, barely more than shiny beads, we got to snap our fingers and bark commands just like the old days. We even got to restructure little nations' economies to conform to our own.

And then George Bush, the Republican Congress and the immortals of Wall Street had to go and bugger it all up. Now the Third World, which never really saw the Promised Land we said they'd reach by following our rules, is reeling from our wanton excesses and greed. Now the third and second-tier states are seeing they had jumped into the car with a drunk driver - us. They want out. They don't want to ride with us anymore. They're looking to park their trust with someone else, China perhaps.

Remember that neo-con outfit that brazenly called itself "The Project for The New American Century"? Those guys were so deranged as to believe that America really had the right to use its military superiority to thwart potential economic rivals. America was going to cruise through the 21st century as Number One and if you thought otherwise, they were going to whack you silly.

Then along came Afghanistan and along came Iraq and the world's illusions about America's military prowess were shattered on the streets of Fallujah and Baghdad. The quagmires that followed exposed America, left it looking plainly vulnerable, incapable of achieving victory by the application of brute force. That was the first mistake. Then came the US meltdown that triggered the global meltdown. That was the second mistake.

Suddenly it's become clear that America isn't going to just jump back up on its perch this time. From here on in it's going to be among us, no longer above us, an equal but no longer the 'first among equals' stature it had claimed going straight back to the days when Hitler was still winning WWII.

'The New American Century' has morphed into the 'Last Picture Show of American Superpowerdom.' It's sort of fitting in a way. We white guys, The West, have had a pretty good run these past two millenia or more going back to the Greeks and Romans, through the Middle Ages and into the rockstars of the Industrial Revolution where we really learned to throw our weight around. We got astonishingly good at sucking the wealth out of everybody else, taking for ourselves the lion's share of world resources to ensure our prosperity. We had a pretty good run while it lasted but we took far too much for granted. We blew it.

There's a new order emerging, one in which the West will no longer have exclusive control. It'll be a world in which the third-tier countries suddenly have options, new suitors vying for their loyalty. The funny thing is, this was all our own doing.
Posted by The Mound of Sound at 8:01 AM

Remember that neo-con outfit that brazenly called itself "The Project for The New American Century"?

You say that as if they've gone away but they haven't. They've just changed their name to The Foreign Policy Initiative.

Sure, Kristol can try to reinvent himself but it's over. The little people no longer believe.