Moonwalker to US Government - Bring Out the Little Green Men 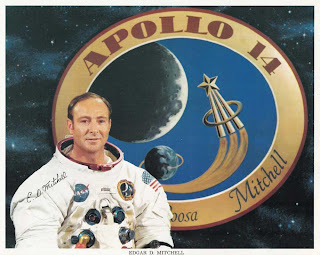 Okay, he has a PhD in aeronautics and 'astronautics' from MIT. And okay, he was an astronaut and he did walk on the surface of the moon and holds the record for the duration of his moonwalk.

I get all that BUT the guy's from Roswell, New Mexico!

Former Apollo astronaut Edgar Mitchell has added his voice to the chorus saying that alien life does exist and that his government should stop the cover-up. From The Guardian:

"We are being visited," he said. "It is now time to put away this embargo of truth about the alien presence. I call upon our government to open up ... and become a part of this planetary community that is now trying to take our proper role as a spacefaring civilisation."

Growing up in Roswell, New Mexico - where some UFO experts believe a crash took place in 1947 – Mitchell said residents of the town "had been hushed and told not to talk about their experience by military authorities" and were told they would suffer "dire consequences" if they did.

Residents relayed eyewitness accounts of alien sightings to him because they "didn't want to go to the grave with their story. They wanted to tell somebody reliable. And being a local boy and having been to the moon, they considered me reliable enough to whisper in my ear their particular story."