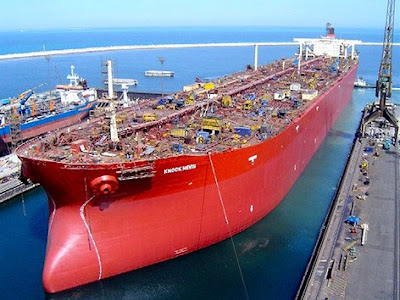 This sounds hard to believe but a study claims that the world's 15-largest ships emit as much pollution as the planet's 760-million cars. From The Guardian:

Pressure is mounting on the UN's International Maritime Organisation and the EU to tighten laws governing ship emissions following the decision by the US government last week to impose a strict 230-mile buffer zone along the entire US coast, a move that is expected to be followed by Canada.

The setting up of a low emission shipping zone follows US academic research which showed that pollution from the world's 90,000 cargo ships leads to 60,000 deaths a year in the US alone and costs up to $330bn per year in health costs from lung and heart diseases. The US Environmental Protection Agency estimates the buffer zone, which could be in place by next year, will save more than 8,000 lives a year with new air quality standards cutting sulphur in fuel by 98%, particulate matter by 85% and nitrogen oxide emissions by 80%.

Shipping emissions have escalated in the past 15 years as China has emerged as the world's manufacturing capital. A new breed of intercontinental container ship has been developed which is extremely cost-efficient. However, it uses diesel engines as powerful as land-based power stations but with the lowest quality fuel.

The calculations of ship and car pollution are based on the world's largest 85,790KW ships' diesel engines which operate about 280 days a year generating roughly 5,200 tonnes of SOx a year, compared with diesel and petrol cars which drive 15,000km a year and emit approximately 101gm of SO2/SoX a year.

So, why is the global shipping industry using, and even today building, fleets of such lethally polluting vessels? Simple. They do it because we let them do it. Besides it probably shaves a few pennies off every item on those Wal-Mart shelves jam packed with crap from China that you pick up when you feel like shopping yourself out of a job.
(Photo caption. The granddaddy of them all, the Knock Nevis, which began life as the Viking Jahre. Just over 1,500 feet long, 650,000 tonnes fully loaded. Stood on end, it would be taller than the Sears Tower (sans antennae). 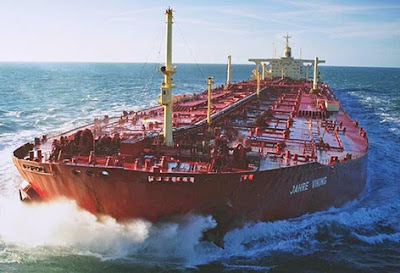