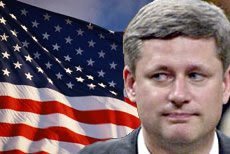 This is outrageous. The prime minister's office is going to use Canadian taxpayers' money to boost Steve Harper's profile in the American media. Somewhat fittingly, they've even put Bush hack, Ari Fleischer, on the payroll to 'git'er done.' From (who else?) CanWest:

"Canada has a very good story to tell and it won't tell itself," said Kory Teneycke, Mr. Harper's spokesman.

"The person best-positioned to tell that story in the [American] media is the prime minister."

Perhaps CanWest is still hoping for a Harper bail out but this isn't about telling the Canadian story, it's about Steve Harper being positioned to promote Steve Harper. Once the Tory knives come out, Steve's pretty much washed up here at home. He's trolling for something lucrative down south and doing it on your dime.
If you're willing to risk losing your lunch, read the rest of this drivel here:
http://www.nationalpost.com/most-popular/story.html?id=1500144
Posted by The Mound of Sound at 8:40 AM

Email ThisBlogThis!Share to TwitterShare to FacebookShare to Pinterest
Labels: Delusions of Grandeur, Harper

This shouldn't be allowed - not on the taxpayer's dime. Let Steve pay for it out of his own pocket.

I agree with you - he's job trawling but using "getting Canada known" as an excuse not to pay for any of it. It's gross, downright indecent!