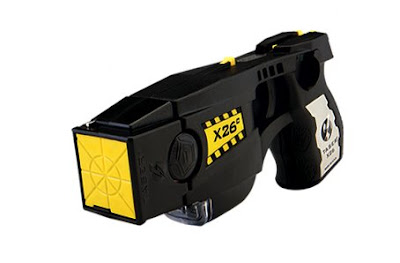 This is why we need the CBC.

A CBC News investigation has found some older models of Tasers prove to be far more powerful, as much as 50% more, than specified. The X26 models were manufactured by Taser International before 2005. Roughly 10% of the weapons sampled proved to be excessively powerful.

Scientists who performed the tests noted that Tasers are unlike other electronic devices in that there are no international standards governing their production.

Alberta ran tests that also came in with 10% results. The province has now sent the first batch of its Tasers to Ontario for testing and is moving to set up a testing facility in Alberta. It plans to eventually test all 1,100 Tasers in service in the province.
Posted by The Mound of Sound at 10:26 AM

Email ThisBlogThis!Share to TwitterShare to FacebookShare to Pinterest
Labels: taser