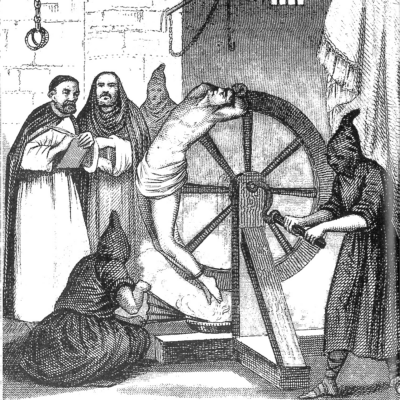 Obama's release of CIA torture memos sent Dick Cheney and Karl Rove into full flight to FOX News studios to announce that, okay, they tortured but it was to gain important intelligence that kept America safe from further terrorist attacks.

It turns out Dick and the gang were a lot more Old School than that. They were using torture in the run up to their invasion of Iraq to get known al-Qaeda bigwigs to falsely admit to an Iraqi involvement in the terrorist movement.

You see, everyone - from the top prelates of the Spanish Inquisition to the worst monsters of the Khmer Rouge - has used torture for the same purpose, to extract confessions, false confessions. Britain's Tower of London was in that very business too. You charge somebody, torture them into confession and with a volley of a firing squad or the swoosh of a headsman's axe, all your problems are over.

Once again the story filtered out via McClatchey Newspapers and their veteran correspondent Jonathon Landay:

The Bush administration applied relentless pressure on interrogators to use harsh methods on detainees in part to find evidence of cooperation between al Qaida and the late Iraqi dictator Saddam Hussein's regime, according to a former senior U.S. intelligence official and a former Army psychiatrist.

Former Vice President Dick Cheney and others who advocated the use of sleep deprivation, isolation and stress positions and waterboarding, which simulates drowning, insist that they were legal.
A former senior U.S. intelligence official familiar with the interrogation issue said that Cheney and former Defense Secretary Donald H. Rumsfeld demanded that the interrogators find evidence of al Qaida-Iraq collaboration.

"There were two reasons why these interrogations were so persistent, and why extreme methods were used," the former senior intelligence official said on condition of anonymity because of the issue's sensitivity.

"The main one is that everyone was worried about some kind of follow-up attack (after 9/11). But for most of 2002 and into 2003, Cheney and Rumsfeld, especially, were also demanding proof of the links between al Qaida and Iraq that (former Iraqi exile leader Ahmed) Chalabi and others had told them were there."

So what's a guy to do when he can't get his captives to volunteer any link between al-Qaeda and Saddam Hussein? Why torture him and just keep torturing him until he says whatever you want to hear. When reports came out about people being waterboarded 180-times, it didn't make any sense. Now it does. These monsters were trying to extract false confessions to bolster their designs to wage an illegal war of aggression. The truth didn't matter. They wanted a justification as cover for an obvious war crime.

But wait, there's more! Remember those Justice Department lawyers now under the crosshairs for their memos justifying torture? McClatchey reports that newly declassified documents show these sycophants "...were operating not on their own but with direction from top administration officials, including then-Vice President Dick Cheney and National Security Adviser Condoleezza Rice."

Attorney General Eric Holder told reporters that he'd "follow the evidence wherever it takes us" in deciding whether to prosecute any Bush administration officials who authorized harsh techniques that are widely considered torture.

There's no longer any cutout to protect Dick Cheney. This isn't going to wind up at a dead end with a handful of sacrificial Justice Department lawyers. Cheney was telling them what to write just as he was telling his torturers to get these captives to say what he wanted them to say. It's precisely the same way as he pressured the intelligence agencies to say what he wanted them to say too. This creep is positively medieval. There's a word for people like Dick Cheney. It's "Evil."

This isn't over, not even remotely. We're told there are more documents, more disclosures to come.
Posted by The Mound of Sound at 10:42 PM

Rice is coming to speak at the University of Calgary in May.

Rice is coming to speak at the University of Calgary in May.It seems Calgary is Bushco "safe haven". How very odd.

Cheney is such a dick.

I've been curious at the reaction to these latest revelations. It's almost as though many have become too jaded to express outrage. "Oh we knew that" sort of thing or even simple indifference. Outrage at atrocity is healthy just as the pain we feel when we touch something really hot. It's how we experience it that surely causes us to respond. If we don't experience outrage, does it matter? We know that people who've lost their ability to feel pain wind up hurting themselves accidentally a lot.