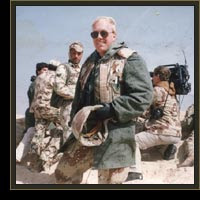 Veteran war correspondent and divinity scholar Chris Hedges is about as progressive as they come.

Hedges argues that the only way remaining for Americans to save their country is to revolt:

America is devolving into a third-world nation. And if we do not immediately halt our elite's rapacious looting of the public treasury we will be left with trillions in debts, which can never be repaid, and widespread human misery which we will be helpless to ameliorate. Our anemic democracy will be replaced with a robust national police state. The elite will withdraw into heavily guarded gated communities where they will have access to security, goods and services that cannot be afforded by the rest of us. Tens of millions of people, brutally controlled, will live in perpetual poverty. This is the inevitable result of unchecked corporate capitalism. The stimulus and bailout plans are not about saving us. They are about saving them. We can resist, which means street protests, disruptions of the system and demonstrations, or become serfs.

The corporate state, and the political and intellectual class that served the corporate state, constructed a financial and political system based on illusions. Corporations engaged in pyramid lending that created fictitious assets. These fictitious assets became collateral for more bank lending. The elite skimmed off hundreds of millions in bonuses, commissions and salaries from this fictitious wealth. Politicians, who dutifully served corporate interests rather than those of citizens, were showered with campaign contributions and given lucrative jobs when they left office. Universities, knowing it was not good business to challenge corporatism, muted any voices of conscience while they went begging for corporate donations and grants. Deceptive loans and credit card debt fueled the binges of a consumer society and hid falling wages and the loss of manufacturing jobs.

The bullet to our head, inevitable if we do not radically alter course, will be sudden. We have been borrowing at the rate of more than $2 billion a day over the last 10 years, and at some point it has to stop. The moment China, the oil-rich states and other international investors stop buying treasury bonds the dollar will become junk. Inflation will rocket upward. We will become Weimar Germany. A furious and sustained backlash by a betrayed and angry populace, one unprepared intellectually and psychologically for collapse, will sweep aside the Democrats and most of the Republicans. A cabal of proto-fascist misfits, from Christian demagogues to simpletons like Sarah Palin to loudmouth talk show hosts, who we naively dismiss as buffoons, will find a following with promises of revenge and moral renewal. The elites, the ones with their Harvard Business School degrees and expensive vocabularies, will retreat into their sheltered enclaves of privilege and comfort. We will be left bereft and abandoned outside the gates.

http://www.alternet.org/workplace/135414/who_should_resist%2C_and_who_will_become_serfs/
Posted by The Mound of Sound at 9:48 AM

I believe he is right, the pendulum has swung too far that without drastic action they are sprialing into facism.

What an astonishing world it might be if Americans discovered how to vote in their own self-interests. It's disappointing to watch them surrender their votes to those who manipulate them with fear and anger. That's not to say that this doesn't happen elsewhere but the Lee Atwater/Karl Rove school has taken it to a dangerous new level. Having a vote doesn't mean much if it's not tied to having a say in how you're governed.