China Stakes Its Claim to the Arctic 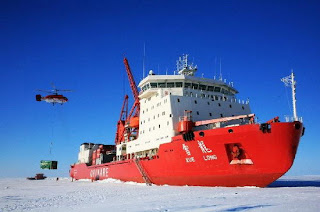 It's our fault if we don't listen for China has been loud and clear that it considers it is entitled to a powerful, potentially military presence in the Arctic and a stake in Arctic ocean resources.

To date, China’s economic ambitions in the Arctic have been largely thwarted by Arctic states wary of the country’s claim that the Arctic “is the inherited wealth of all mankind,” and that China has a role to play in its future because it is a “near-Arctic state.”

Iceland, for example, twice rejected a Chinese plan to buy a 115-square-mile farm along its northern coast for a proposed golf course resort; the island nation, which is located at the confluence of the North Atlantic and Arctic oceans, feared that the proposal was part of a thinly veiled plan to build an Arctic port.

Canada has also been unsettled by China’s reluctance to recognize its assertion of sovereignty over the Northwest Passage.

“It’s not because the Arctic countries have stopped being suspicious of Chinese ambitions,” explains [Rob] Huebert [of the University of Calgary and a member of Canada's polar commission]. “The reality is that China is too ambitious and too big to ignore. The fear is that they would just continue going after what they wanted in the Arctic even if their application was rejected. Who is going to stop them?”

How effectively members of the Arctic Council will be able to influence or constrain the ambitions of China and other Asian powers in the Arctic is an open question.

“The Chinese know that they need us for the resources, but they have also made it clear that when it comes to their core interests, it doesn’t matter who their friends and allies are — they will do what they need to do,” observes Huebert.

Officially, China, whose northernmost territory is as close to the Arctic as Germany’s is, says it does not covet the Arctic for its resources, but rather has a genuine interest in the fate of the region.

Chinese resource companies have invested $400 million in energy and mining projects in Arctic Canada [Harper gave China an Arctic toehold when he approved the Nexen takeover] and they’re promising to invest $2.3 billion and 3,000 Chinese workers in a mammoth, British-led mining project in Greenland.

CSIS even warned of China's, huge invasions into Canada. BC was specifically mentioned because, ex BC Liberal Premier Gordon Campbell, had already given much of BC to Communist China, long ago. Campbell actually, shipped our BC mills to Communist China, along with their raw logs. The Campbell/Clark BC Liberals work for Harper. We call the BC Liberals, Harper's satellite party. Campbell twice lied and cheated to win his elections too. Just as his good buddy Harper does. The BCR wasn't for sale. The HST wasn't on Campbell's radar either. Christy hired one of Harper's henchmen Boessenkool, to work for her too.

Harper's Omnibus-Bill gives Communist China the right to sue Canada, if anyone blocks Red China's takeover of Canada. China sued in BC, to take the mining jobs. China's miners earn, $800 per month. There are nine mines and mine expansions going into, Northern BC. Wonder who Harper will give those jobs to? Canadian resource workers, can't have any of the resource jobs because, they don't speak Chinese Mandarin.

Then there is, Harper's FIPA deal with Communist China? Canada will be taken over by China, for 31 years. China will be taking our rich resources in the High Arctic. China is also taking, the timber and the Mines, on Vancouver Island.

Christy has done absolutely nothing regarding, Harper giving Communist China our BC resources, nor the resource jobs either. Don't anyone think Christy isn't in favor of the Enbridge pipeline either. We know different.

We know we will never get Communist China, out of Canada. China has polluted much of their farmland and 40% of their water. There will be, swarms of Chinese over here. No doubt they will take our food crops and, our water as well.

Trust Harper and his Cons? Trust the Campbell/Clark BC Liberals? Not on your Nelly.

Yeah Anonymous, I remember being very worried by the Harper FIPA deal with China. Its certainly not a fair deal for canada and I cannot think what harper got in return for signing our country away like that. Perhaps a position on board of a chinese superconglomerate.
What baffled me is why more conservatives werent up in arms against it. I remember Kelly McParland wrote a scathing piece contesting the benefits...and he usually is in favour of haperites.

That deal was really a travesty but I had no idea until reading your comment had bad it was for BC.

It really sucks that our pathetic excuse for a Slime Minister is Commie China's Bitch!

God, you'd think they were Americans.

If this doesn't suggest that Harper is a traitor, I don't know what would.