Is This "Two Strikes" for Calgary? 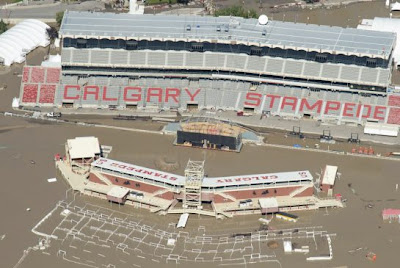 Sorry, Calgary, but when once-a-century floods begin turning up once-a-decade (or even less) you need to realize that either climate change is very real and here to stay or that God just really hates you.  Okay, or both.

Calgary is, of course, Canada's oil town which I suppose lends a bit of support to the Hand of God argument if you're the superstitious religious type.   And God does, after all, have a pretty open history of sending floods to clean house.  Just sayin'.

In the course of civilization, mankind has settled in low-lying areas along waterways.  It's just easier that way not to mention all the side benefits like, well, water - something most of us like, a lot.  It's just that what was a fine idea for the stable climate conditions of the past two thousand plus years might not work so well for the next thousand or two.

It's not like the flooding Calgary and the rest of southern Alberta is experiencing can't be handled.  Of course it can.  Here I like to use my boxer analogy.  In a prize fight the question is never whether a boxer can take a punch.  Of course he can.  The question is how many punches can he absorb before he's flat out on the mat.  That's what you're betting on.

It takes time to get over a severe weather event.  Actually it takes time and money, and sometimes an awful lot of the latter.   But you put in the time and you put in the effort and all that money to make everything right again based on some reasonable expectation that you won't have to do it all again for a good, long time.   That's what you're betting on, that expectation you won't have to go through this again for decades, generations. 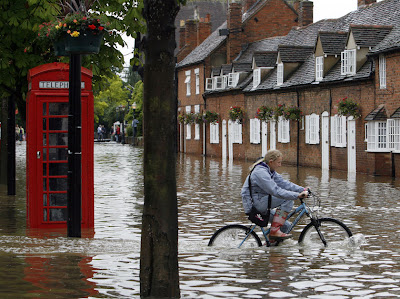 In recent years you might have noticed photos like the one above showing picturesque little British towns awash in flood waters.  They've been getting once in a century floods every year or two lately.  And now some of those towns are warning they can't take more than another one or two before they'll simply have to be abandoned.  It's not just the costly damage to those quaint buildings although that's bad enough.  It's also the costly damage to all that supporting infrastructure that's becoming too expensive to be made good again and again and again.

Abandoning little towns like the one in the photo is itself an extreme form of climate change adaptation, climate change dislocation.  You adapt by giving up and moving.  That could never happen here, right?  Wrong.

We're just beginning the process of dislocation.   Alberta's Tory government, as we now know, commissioned a flood mitigation study in 2006, right after the First Great Flood, and then sat on it until last year, just in time for the Second Great Flood.  The report identified flood plain risks and recommended a ban on development there.  "What?  No development?  Are you out of your frackin' mind?  This is ALBERTA for f--k sakes.  Ditch that report."

Well that 2006 study is probably useless now anyway.  It was based on the 2005 flooding, back when they thought that really was a once-a-century event.  By some estimates the 2013 floods could be three times worse and so "flood plain" has taken on a much larger dimension.  And that once-a-century business is now pretty much debunked.

Will the Alberta government do a new flood mitigation study?  That would involve thinking the unthinkable, the great conundrum that climate change forces on us.   How do we persuade people to prepare for things far outside of our experience?   Today's political classes don't work that way.  They don't have the political vision or the moral courage.

How will Alberta's municipal, provincial and federal representatives deal with this?   That is anybody's guess.  Climate change denialism is a powerful force in the Wild Rose territory, especially with the religious fundies, and loyalties are split between fealty to the Oil Patch and the well being of ordinary Albertans.  I'm pretty sure they won't be calling David Suzuki or Maude Barlow for advice.

Oh well at least the people of Calgary can look to their federal representatives to do what's right.  Oh, that's right, Harper's one of them.   Okay, forget it.
Posted by The Mound of Sound at 9:04 AM

The University of Western Ontario's Institute for Catastrophic Loss Reduction likewise complained in a lecture delivered to the insurance industry in 2011 that the Canadian insurance industry, unlike its counterparts in other G8 countries, avoids responsibility for catastrophic flood losses on homeowner policies by excluding such losses, and passing such costs on to homeowners and/or government.

Here it is not an issue of penny-pinching homeowners deciding not to properly insure their homes and passing their losses on to government in the form of relief programs, but of financial institutions selling mortgages to homeowners, and often the same companies acting as insurance providers selling inadequate policy coverage to homeowners, whereby homeowners foot the bill themselves for such losses or seek some compensation from government relief funds...

There is a subsidiary argument to this, which deals with safety and health issues with respect to the insurance industry's abdication of its responsibilities with respect to catastrophic flood losses, to wit, if the insurance industry accepted responsibility for such loss, they would properly compensate homeowners for such loss, subject to some minor deductible, say $ 500 to $ 1000, but would ensure that cleanup was done properly, basements and ground floors properly decontaminated, bad material removed and replaced, that proper reliable contractors would carry out repairs in accordance with building codes, etc, etc. Insurers generally do not want to be faced with lawsuits by disgruntled policyholders and unlike the Harper government will not reward the renovation contract to the cheapest, most unreliable bidder but will rather pay a bit more to ensure the job is done properly by a reliable contractor, as they have no desire to pay for the same repairs twice.

Whereas if renovation costs, and the responsibility for renovations is left in the hands of policyholders, with inadequate coverage, there will be a temptation to cut costs and cut corners, to not decontaminate basements, to do it themselves or award the contract to unlicensed contractors with all sorts of building code violations, improper wiring and increased fire risks, increased health risks due to mold, decreased property values and so on and so forth. So here the industry is short-sighted, as it may have avoided the restoration costs by excluding coverage for such losses on its policies, but the restored property, improperly renovated after the fact is not the same as the property initially insured, and presents greater health risks to its occupants and a greater potential loss risk to the insurer....

Fascinating points, Rene. I was wondering about the flood insurance issue. I read that the City of Calgary has been advising homeowners that, in the case of sewage backup in their homes, they should contact their insurer. They way they singled out sewage suggested that general flood loss wasn't covered. You've confirmed that.

How do cash-strapped governments, like Alberta's, deal with the problem? Are they to hand it over to Ottawa? Disaster relief was always premised on exceptional, rare and unforeseeable loss. How are we to treat persistent or chronic loss?

When I chose my retirement house I settled on a property atop a 60-foot granite escarpment that drains straight into the sea. I always wondered if the day might come when that mattered.

Entirely correct. The purpose of such relief funds was to assist homeowners with no insurance or with inadequate coverage in the event of catastrophic loss, not to cover all homeowners in the province who happen to hold policies of insurance suffering catastrophic loss simply because their insurers deliberately chose to exclude them from coverage for such losses.

In such circumstances, it is tantamount to all homeowners having no insurance coverage for catastrophic loss despite paying for a policy intended to provide such coverage, and demanding that government step in to provide them compensation which should have been provided by their insurer in the first place....

The town of High River which was hardest hit with four deaths and flooding of all the downtown area, are still not allowing people to return to their homes. Why? It's any bodies guess. However, with time involved, mold and other contaminants have already begun to form and if left any longer, homes will have to be condemned. Or, people move back in...mostly retired people...and live in that situation until they become ill and die. Hurray...the government won't have to pay out compensation,retirement or health care. Even the Chinese look after their elderly better than that.

Calgary helicopters are save your important time by using the services of calgaryhelicopters.ca.