Jesus Christ - It Seems He Was Onto Something 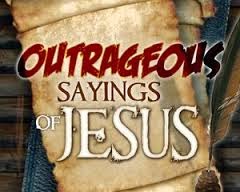 It is easier for a camel to go through the eye of a needle than for a rich man to enter the kingdom of God.

The gospels of Matthew (19:24), Luke (18:25) and Mark (10:25) all attribute the identical words to Jesus.  In these days of rampant and runaway inequality they're good words to keep in mind, especially if you believe in heaven and hell. The rich may have it all their way now but they'll get their comeuppance on the other side of the eternal curtain, eh?

I wonder if Jesus knew what we're only now scientifically documenting about rich people - that they're shits.

1. Too Much Money Can Make You Greedy: Researchers at the New York State Psychiatric Institute interviewed 30,000 people and found that richer Americans are more likely to shoplift than the poor. Another study at UC Berkeley found that the “richer the person was,” the more likely they'd pilfer candy from a jar labeled only for children.

2. Too Much Money Can Make You A Cheater: UC Berkeley's Paul Piff had participants of different income levels play a game that offered a $50 cash prize. He found that people with incomes of $150,000 a year cheated four times more than those who made $15,000 a year. This is striking because $50 makes a much bigger difference in your life if you make $15,000 a year than $150,000 year. It could mean the difference between paying a bill or not, having lunch or going without, or buying a friend a beer.

3. Too Much Money Can Make You More Stingy: Nonprofit researchers looked at charitable giving and found that people with incomes below $25,000 give away around 4.2% of their income while those of at least $150,000 in income give away around 2.7 %.

4. Too Much Money Can Make You Less Empathetic: UCLA's Keely Muscatell found that people with great income “exhibit less activity in the regions of the brain associated empathy when shown pictures of kids with cancer.” Researcher Dacher Keltner found in twelve different studies that “lower class people just show more empathy, more prosocial behavior, more compassion, no matter how you look at it.”

5. Too Much Money Can Make You More Difficult To Satisfy: Harvard's Michael Norton asked people how happy they were, and found that rich people consistently “said they needed two to three times more than they had to feel happier.”

So, consider your poverty a blessing.  Think of it as an enormous hurdle you won't have to clear to get through St. Peter's gate.
Posted by The Mound of Sound at 9:39 AM

Interesting information, though it's not exactly much comfort if you're an Atheist like myself.

I too am not much of a believer but a good many of the uber-affluent contend they are. America's Christian Right has even set up a venture to excise this sort of socialist stuff from the Bible.

"America's Christian Right has even set up a venture to excise this sort of socialist stuff from the Bible."

Really? Where did you find that out?

Jesus was a lefty