The United States of Assholery 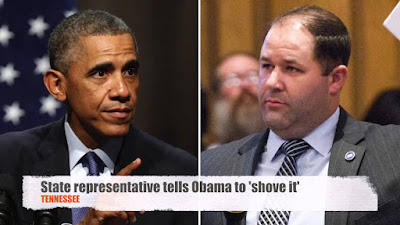 How did America give birth to this sub-culture of total assholes? Case in point, Tennessee representative Andy Holt.

Just days before the Orlando massacre, Holt announced a fundraiser would be held at his family farm.  He was laying on quite a spread, a roasted hog, a petting zoo, live music and hay rides for the kids. And there was even a door prize, an AR-15 semi-automatic assault rifle.

In the wake of the Orlando slaughter, representative Holt realized the situation had changed. And so he decided he'd give away not one AR-15, but two.

"That's right…. I'm now giving away TWO AR-15s!" he wrote on Facebook on Monday. "I'm sick and tired of the media and liberal politicians attacking our right to keep and bear arms. I'll do everything I can to ensure the 2nd Amendment is protected and people are equipped to exercise their innate right to self-defense [sic]."

It's not that some lowlife like representative Holt did something like this that's troubling. It's the utter predictability, no - absolute certainty, that a tragedy like the Orlando shootings would generate this type of response, that is the most disturbing part of modern American culture. That is a civilization in decline.

Gun sales are surging at a record setting pace.

We need to hurry up and get that damn wall built.

Bear arms? I don't know if it's a right, but the Americans sure are bearing a lot of assholes these days.

And that includes all of the crudeness and ignorance that accompanies that civilizations decline. It is like living next door to Bubba.

The right to bear arms was muskets. And, no concealed carry.

The bigger the wall, the happier us Canadians will be.
You can bet we'll feel one hell of a lot safer.


I'm not sure if a wall would work. We have to socially, culturally and politically inoculate ourselves against this contagion.

There's a fellow I know, the son of a late secretary of mine, who is a Christian fundamentalist. He's on Facebook. Every time there's a disaster, he's always posting prayers for the lost and the survivors. This time around, Orlando, not a peep. Not a mention of it, nothing. I think I know what's behind that.

Anon 12:16 - that's a novel proposition. Do you have any authority for the "bare" arms claim?