Could This Be It? Are China, S. Korea and the U.S. Coming for Kim Jong-un? 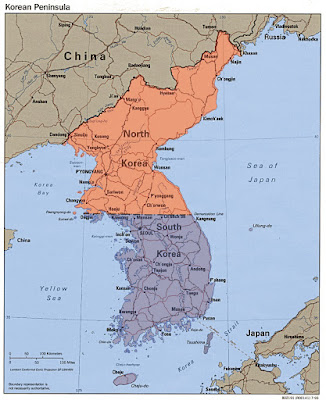 For the past couple of days there have been reports of a US Navy carrier battle group steaming for North Korea. The formation is now said to be off the Korean coast. At the same time secretary of state, Rex Tillerson, announced that Washington and Beijing have reached some pact on dealing with the errant tyro, Kim Jong-un.

The Sydney Morning Herald reports that Chinese troops are massing on the North Korean border.

China and South Korea have agreed to take new measures against North Korea if the rogue state conducts another nuclear or intercontinental missile test, Chinese media has reported.
As concern mounts that North Korea will use a national commemoration on Saturday to conduct its sixth nuclear test, claims the Chinese army has amassed 150,000 troops including medical teams on the border with North Korea have been repeated on the front page of China's state-owned Global Times newspaper.
...

South Korea's Yonhap news agency reported the two sides had agreed that if North Korea conducts another nuclear test or missile launch, China and South Korea will carry out any future United Nations Security Council resolutions that are passed.

Meanwhile, some 50 miles from North Korea, the US Air Force base at Osan is on high alert.

What is often overlooked is that when sizeable military forces reach a certain level of readiness and deployment, it's often an indication that the decision to act has already been taken.

It would be easier for the North Koreans to launch missiles at China than at North America. One would expect the Chinese to be particularly worried. China was somewhat tolerant with NK under the previous dictator; there's a certain amusement at tweaking the American nose. Considering the exalted lunatic now ranting and raving in Pyongyang the Chinese may not be as complacent.

NK also shares a border with Russia. Do you have any speculation about that?

I would think the prime targets would be Seoul and Tokyo, especially if he was going to use nukes.

Could China's participation be an attempt to spark a coup against Kim?

As for Russia there's a rail bridge connecting to North Korea but no truck, car or pedestrian crossing. I think Russia would steer well clear of this.

"Could China's participation be an attempt to spark a coup against Kim?"

Good question; I didn't think of that one. I have my doubts that a coup would be successful at present. However, cell phones, laptops, Western movies are being smuggled into NK and are taking hold. The word is catching on that life outside of NK is better. Time will tell. Someday the pitchforks will come out but I'm not holding my breath.

Mound, have you read this? "Nuclear Korea and Donald Trump"

How realistic is his assessment? Should people get out of South Korea?

Thanks for the link, Toby. That blog post is not particularly helpful.

Barring some pre-emptive strike I think Trump's options are limited. Washington would need to have very high confidence that US forces have a thorough knowledge of the locations of all of Kim's major weapons: nuclear, chemical and biological; NK's air defences and command structure, Kim's tactical and strategic missiles and his most threatening artillery installations. They would also need very high confidence in their ability, on a first strike, to take down the air defences, decapitate the government and command structure while also neutralizing Kim's missiles and WMDs.

Trump's other option, presumably in conjunction with China, would be to drive a wedge between Kim and his generals or enough of them to stage a powerful coup and stand down the military at the same time.

I have little confidence that America is in any position to stage a pre-emptive attack which would achieve all or even most of those essential objectives. That leaves the default option the possibility of a coup.