What's Lurking in the Shadows of Washington? 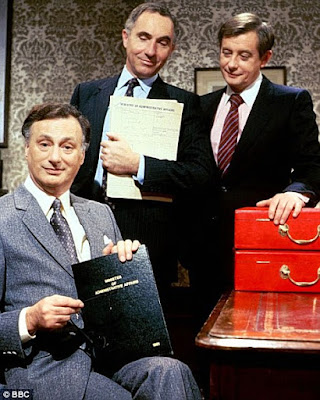 We've been having a discussion in the previous post about this thing - or supposed thing - the "Deep State." It's become the favourite whipping boy of the politically engaged, from left to right and everything in between. It's this mysterious cabal of backroom types who truly pull the levers of power.

To Donald Trump, they're the guys who run the intelligence/security apparatus. They're the fuel for Trump's paranoia, forever leaking information that usually refutes his favourite communication technique - lying.

To the left wingers such as Greenwald, the Deep State quests for nothing less than control and, as such, represents a grave threat to American democracy. John Light of BillMoyers.com offers this less than entirely helpful synopsis.

I don't buy much of this Deep State business. Here's why. Yes there are senior people in the US government who have little good will toward Trump. Yet the oath they have taken is to the country, its Constitution, not the president. America has no monarch. If they see their country imperiled, even by its president, they're sworn to defend it. They're caught up in a situation never confronted before.

There has never been a president whose loyalty to the country was questioned and so obviously. Trump is damaging the United States in several serious ways. He's undermining America's alliances. He's left Washington's intelligence partners, the 5 Eyes, doubting his integrity. He could be putting America on course for a major war. Domestically and internationally he's untrustworthy, unreliable, sometimes less than rational.

The intelligence/security community released two open letters, one during the primary campaign, the other during the election campaign. Those letters were signed by prominent officials, recently retired, almost entirely Republicans. They didn't pull any punches. They declared Trump a grave threat to American security and to world peace. I think those are conclusions they could easily come to in good faith. When you have reached those beliefs what do you do when you then see your expressed fears being played out?

In our system of Parliamentary democracy, we've always had this top bureaucrat class, sometimes called "mandarins," who soldier on from one government to the next. They're the keepers of the keys, the "institutional memory" gleaned from their mentors as they climbed the civil service ladder. Think of the BBC series "Yes, Minister."


Sure they have a history of sometimes turning on their masters. Documents get leaked, tales are told.  Harper was utterly paranoid of their power. However they're not some gang of shadow warriors. They're pretty much upfront.

Trump has triggered an exodus of these mandarins from the State Department and, with them, some chunks of the department's institutional memory have been lost. That has had a seismic effect on the foreign policy community who understand what it means to America when diplomacy is taken over by neophytes such as Jared Kushner. In the process the White House has destabilized America's relationships with allies, rivals and adversaries alike.

Unfortunately today the term Deep State is used as a handy way of setting up straw men and they're always shaped to suit the immediate need and circumstance.

The other part of the premise that troubles me is this supposed mortal threat to American democracy. What democracy? When did America last have a functioning democracy?

The question was thoroughly hashed out by two professors, Gilens (Princeton) and Page (Northwestern) in a paper released by Princeton in 2014. If you're not interested in wading through an academic paper, here's the BBC's report on it. The authors' conclusions were challenged in various media outlets prompting them to issue this persuasive rebuttal defending their conclusions.

I think they make a compelling argument. The United States has become a land not just of massive economic inequality but of comparable political inequality. It's an autocracy.

Worse yet, in this digital era of data mining, consent is today manufactured as never before, not even back when votes were bought with cash and liquor. See here, here and here.

It's become a Potemkin democracy, something apparently lost on Greenwald and company. It's a rotten business beginning with a "bought and paid for" Congress, proof positive of political capture. That now extends to regulatory capture where the composition of boards and bureaus of regulators are packed with representatives of the very industries being regulated. The voice of corporatism alone will be heard.

Teddy Roosevelt mused over the constant struggle between labour and capital and how government had to regulate these competing interests. Well that's over. Labour is out, capital has won, not just a battle or two but the war itself. America is an autocracy, one very much in the service of capital.

So what's all this "threat to democracy" business? What democracy? If anything the Deep State appears to be a grave threat only to the current order, the post-democratic American state for there is no other state for them to threaten. Only if you overlook these things - political capture, regulatory capture, the truly insidious manufacturing of consent and the confounding of the electorate - could the fanciful notion of the Deep State as a threat to democracy be anything but laughable.

There's some incoherence here. All the people you're talking about extremely negatively in the latter sections of this piece, and very accurately I would say, are the exact same people whose views you are giving strong respect and endorsement in the first part.
This is why I find it hard to care about the struggle between Trump and his pet lying corrupt oligarchs on one hand, and the lying corrupt oligarchs who are annoyed that his randomness is rocking their nice stable oligarchic boat, on the other. Really, Trump's a scumbag so now I have to suddenly believe and back the CIA, the NSA, and washed-up Republican power-brokers? Strange bedfellows indeed.

It would not surprise you to discover I tend to agree with you on this matter for much the same reasons and reasoning. I left you a link on oaths in the last post just a few minutes back, you might find it useful, I do think it is clearly relevant to the point you were discussing in the last post and to this one as well.

Scotian, thanks for the link. I read the article but found the author frequently stops tantalizingly short of finishing the arguments. It was nonetheless helpful.

I agree with you about the frustrating aspect of it, but like you said it was still a helpful and useful read, or so I found it. It also was something I was not seeing discussed very much, and yet it is clearly an important underpinning to how the Executive Branch works in the USA. I think she was trying to present a very conservative (in the apolitical sense) argument on a very touchy subject with some not so minor repercussions surrounding those arguments were they to be finished off. While I would have liked to have seen them taken to their conclusions, even as much as she did do I found to be worthy of serious consideration.

Glad you found it of use/benefit.

.. its important to examine the overall status of America
in terms of responsibility, ethics.. VS .. fraud & greed

The USA is permeated by fraud, bribe, payoff, scam.
This is at all levels of government.. captured & owned
And trust me, higher education is no different.. no University !

This is the baseline for Trump et al..
after all, if you're not a flagrant thief or fraud
what kind of American political animal are you?

hi Mound... I completely agree with your analysis. All this "Deep State" talk is just more paranoid fantasy from Trump and his conspiracy theorists. I don't doubt that there may be some in the CIA and the NSA who would dearly like to make him pay for calling them Nazis.
And of course the U.S. security services have in the past been involved in all kinds of dirty operations. But they must know that fooling with the fate of a president is a bridge too far, and if Trump is compromised it will be his own fault...

Mound, what are you laughing at? You are laughing at yourself!
N.V. Gogol

"...Political capture, regulatory capture, the truly insidious manufacturing of consent and the confounding of the electorate..." that is EXACTLY was deep state was doing for decades!.
How? Just look at Salamander's comments:"The USA is permeated by fraud, bribe, payoff, scam." & "Money talks."
A..non

A..non, you exemplify what I was getting at when I wrote "the term Deep State is used as a handy way of setting up straw men and they're always shaped to suit the immediate need and circumstance." Your apparent understanding of "deep state" isn't remotely the same as it is used by others. You have shaped it to your immediate need and circumstance. It wasn't the high priests of the intelligence community that turned American democracy into an autocracy. That was done on the floor of Congress. Is that really beyond your grasp? You're flailing, A..non.

@ Sal. Unfortunately America has shifted to a transactional democracy. There's a YouTube clip of John Boehner walking the floor of the House with a stack of white envelopes in hand, dropping one off at various Representative's desks. The envelopes held campaign contribution cheques from tobacco lobbyists that were distributed just before the House voted on that year's tobacco subsidies. Boehner defended it as perfectly legal although he admitted the optics weren't very good. Rome, in the years immediately before its fall, went through the same process.

I don't know, Simon. Remember Deep Throat and Watergate which was all about a senior bureaucrat leaking information to the Washington Post that brought down Nixon.

If I am "flailing" I have a good company.
http://www.truthdig.com/avbooth/item/robert_scheer_the_russians_arent_coming_--_the_deep_state_is_audio_20170403
Few quotes:
"Donald Trump is a menace … but now we have the deep state destroying a president..."
"No one is addressing the real issue here, which is the ability of these secret government agencies to reverse an outcome that the establishment didn’t want—the establishment of the Republican Party and the Democratic Party."
“I know how terrible Trump is, but Trump is a symptom of what’s wrong with this society,” Scheer concluded. “He didn’t create the problem. He’s exploiting it.”
And, no need to worry about my grasp. We are in agreement what "turned American democracy into an autocracy. That was done on the floor of Congress." Exactly, by banksters...
A..non

Don't blame "banksters" A..non. It was the elected representatives who hung out the "open for business" sign. They had the solemn duty to the public and to the country. They took money to break that duty and their oath. They solicited money and they still do. ALEC, the American Legislative Exchange Council, exists as the interface between the political caste and the corporate sector. They don't even try to hide their influence peddling any longer. Every elected official who attends ALEC conferences shows up admitting he/she is for sale.