Let's Give Trump a Break 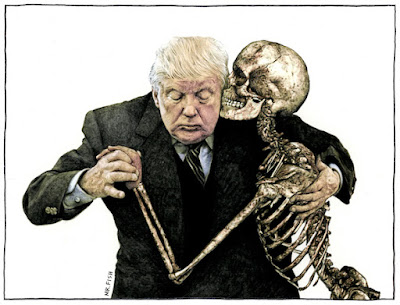 Maybe it's not all bad. Maybe he's doing about as well as could have been expected.

Trump is no Barack Obama. He's not even up to George w. Bush snuff. He's no Clinton or Reagan either. He's sure as hell no John Kennedy or Dwight D. Eisenhower.

Think about all the deficiencies, the baggage, Donald Trump brought to the Oval Office from Day One.

He's the oldest guy ever to be sworn in as president. 70-years old. Reagan hit 70 only when he began his second term.

Those of us who go back a few decades can attest to the toll a presidency seems to exact. We saw what two terms did to Bill Clinton, George w. Bush and Barack Obama. They sure looked a lot older on the last day than they did on the first and they were a lot younger than Trump is today.

Trump's predecessors were more physically fit (even Kennedy) but, more importantly, they were all far more emotionally, mentally fit for presidential service. Okay, let's be blunt, they were sane. They didn't have Trump's psychological issues - his chronic narcissism or his pathological dishonesty. They were more or less reality based. Trump is, in several ways, mentally infirm.

They all had reasonable experience of elected office either on Capitol Hill or in some state house. Congressmen, senators or governors. Trump walked into the top job and he got it cold. That's pretty tough for a such a slow study, with a loose hold on reality, various mental infirmities, an imperious but incurious nature, a disposition toward conspiracy theories, and facing geriatric onset.

Given his own deficiencies, drawbacks and issues, Trump needed an A-List cabinet far more than any of his predecessors. Trump has no James Baker, he has no Henry Kissinger, no Leon Panetta, no George Schultz. No, he's got Stephen Bannon, KellyAnne Conway, Stephen Miller. He's had to govern by executive fiat because, even with his party holding majorities in the House and Senate, Trump can't get Congressional support.  He has tried and failed to make Congressional Republicans fear and obey him. That's a failure that leaves scars.

Other incoming presidents have benefitted considerably from the loyal support of America's core allies.  Trump has largely pissed that away, an act as stupid as it was reckless. It was as though he couldn't wait to get into office to offend them and give them cause to doubt his honesty and reliability. He couldn't even show the basic courtesies of presidential protocol to the Chancellor of Germany.

Unlike all of his presidential predecessors, Trump came into office under scrutiny from the FBI and his intelligence community. If the pillars of your administration don't trust their president at the outset, if they suspect their new president and his associates of criminal subterfuge, chances are there won't be a tranquil term in office.

It's too bad Trump's "ivy league" education didn't include ancient Greek mythology.  Those Greeks understood that the goddess Nemesis exacts retribution from those who succumb to Hubris. If he senses a presence over his shoulder, it's probably her.

He has no relevant experience, Mound -- and it shows.


He's certainly in over his head, Owen. He's actually made it worse by surrounding himself with sycophants instead of getting the A-List talent other presidents have understood were essential to any administration.

Unfortunately, Trump doesn't know what he doesn't know. He's in over his head. And, Bannon is taking him for a ride.


He's totally over his head, UU4077, and he's easily manipulated. Even today he applauded the perspicacity of his favourite "journalists," the talking heads of Fox & Friends.