While Trudeau Fiddles, The Arctic Melts


Across the Arctic, the permafrost is thawing and, like everything else up there, it's happening faster than we had ever foreseen.

CBC News reports on Inuvik where the town's buildings are sinking, settling into what once was their frozen terra firma. Foundations are so compromised that buildings are being demolished.

Half of Canada is blanketed in some form of permafrost, including patches in the northern reaches of Ontario and the Prairie provinces.

But in many places, including around Inuvik, NWT, as much as 90 per cent of this "ground" is actually frozen water. (The rest is dirt, rocks and decomposed organic material that was once trees, shrubs, even animals.)

For years now, buildings in Inuvik have been gradually sinking into the ground as it softens. Others are so unstable, they are literally sliding off their foundations.

...
Scientists in the Northwest Territories, Alaska and Siberia are now realizing that as the ground under them melts, it will not only make life harder for the people living in the Arctic, but will in fact speed up climate change around the globe.

The World Meteorological Organisation says the globe is now in uncharted territory, with temperatures in 2016 the hottest ever recorded.
...

Above the Arctic Circle, the permafrost hasn't melted since at least the last Ice Age, more than 10,000 years ago.

No one knows exactly what it will unleash when it melts. But no one thinks it will be good.

At the very least, it's changing the landscape. The Mackenzie Delta is a maze of small lakes and broad hillsides. People who live in Inuvik say they don't have to travel far from town in the summer to see craters that formed when the surface layer of land simply collapsed. 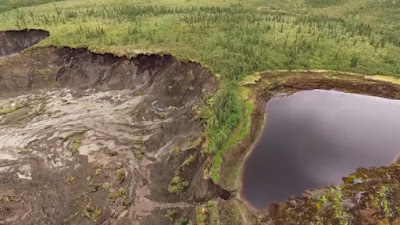 And then, with the drying of the tundra and thawing of the permafrost comes the methane, for hundreds of thousands of years safely sequestered in the icy permafrost.

"It scares me," said Kumari Karunaratne, a permafrost expert who works for the Northwest Territories Geological Survey. "This methane that's being released is being released over huge areas across the north. And it's continually seeping out."

So, what is our federal government doing about this. Is it riding to the rescue of this region in distress? Hardly, it - the government of Justin Trudeau - is ramping up bitumen production and export. Justin Trudeau is intent on making the plight of the far north worse, much worse. Judging by the Trudeau government's policies, he can't make it worse enough, fast enough. Put that in your smug Liberal pipe and smoke it.

Trudeau and crew were elected on a multitude of promises to do better than Harper at just about everything. So far, the Liberals are a big disappointment.

Much of the world sees gasoline prices much above what we pay, some even pushing toward $3.00/ltr. In places where drivers have to pay such high prices one doesn't see jacked up pickups or over sized SUVs; people don't buy V8 engines. One does see solar panels and solar water heaters on rooftops. If Canada was to stop subsidizing the oil and gas companies our prices would rise dramatically; consumers and governments would make better choices.

McKenna needs to learn that her mandate is Environment not trade.

Toby, there's a web site where all of Trudeau's mandate letters to his cabinet appointees are found. Each letter makes clear that every minister has a dual mandate - whatever the hell they're supposed to do, and trade. I was surprised when McKenna pointed this out in defence of her compromise on Canada's Paris climate agreement promises yet, lo and behold, there it is. On his first trip to Davos Trudeau proclaimed that he wanted to be seen by other foreign leaders, first and foremost, as a free trader. He kept that on the down low during the election campaign.

From a moral point of view, there's absolutely every reason in the world to halt and reverse course and the stop poisoning the lands and waters, because that poison is making its way up the food chain into humans.

Time, money, manpower. All that's being wasted on the tar sands, when there's economic opportunity in other fields to be spending it in. Development of safe, green technology. Return to agriculture to stem the threat of food insecurity. Finding methods of doing more with less. Cutting down on excess itself within the nation. Becoming a better nation.

And Truedeau and his Liberals are standing around doing dick all, fiddling about as Alberta sinks into poison, and the Tundra collapses, changes, and transforms right under foot.

It's gone past "disappointing," past "frustrating," and is now well and truly at "infuriating," Troy. There is an arrogance to this. Bad as that was with Harper it's far more deeply grating from Trudeau and his Libs.