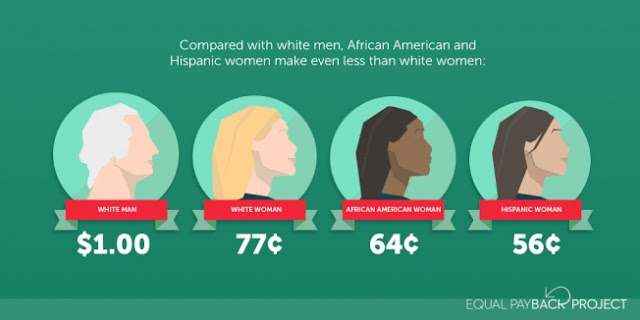 Equal for whom, when?

Tuesday will be Equal Pay Day. On a global basis, it's the day on which the average woman has to work to equal the pay the average guy earned over the previous year. In other words, it takes an extra three months, two weeks or fifteen months and a bit for the average woman to earn what the average man earned in just twelve months.

However not all women are average and certainly not if they're black or brown. The American numbers tell a much different tale.

The official Equal Pay Day statistics are based on 2015 census data. But Mic updated those figures using Bureau of Labor Statistics figures on median weekly earnings for full-time workers in 2016. Using those numbers, the actual Equal Pay Day for U.S. women of all races would technically be March 22.

Black women in the United States, on the other hand, wouldn't have their equal pay day until June 5. And if you're a Hispanic or Latina woman, you're going to have to wait until July 25 for your equal pay day.

Again.
Women will never be equal.

That is until they can walk down the road with a beer belly, bald head and the crotch of their pants by their knees ; and still think they are sexy!!

now for those squares