It Could Be Another Hot, Riotous Summer for the United States


It happened in an instant. 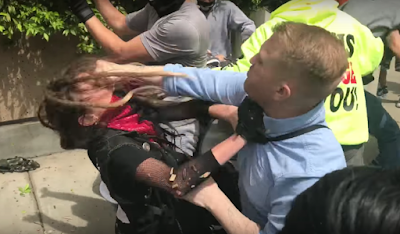 The guy in the blue shirt is identified as Nate Damigo, a white supremacist who attends California State University. In the clip below, at the 30 second mark, you can see Damigo punching this unidentified woman, a Trump protester, dropping her to the ground.

The riot occurred at Berkeley as Trump supporters clashed with "AntiFa" (anti-fascist) demonstrators. The Trump gang labeled themselves "pro-free speech."

It does carry the hallmarks of the violence between socialists and fascists in Germany in the 30s. It bears an eerie similarity to fascist riots in Israel and across Europe in recent years.

I get the feeling that the thugs can't act on their own but are waiting for orders to escalate the violence.


I get the same sense of it, Rumley. This is an order of magnitude greater, darker and more ominous even than the divide during the Vietnam era while I was doing my undergrad in the U.S. They've got liberals, even gay groups, forming their own gun clubs now, loading up on AKs and AR-15s, and logging hours at the range. We never witnessed anything remotely like that during Vietnam.

and then there's this

Got to like the guy with the Jesus will judge you shirt whilst beating the shit out of someone!!

Yeah, I caught that too, TB. Precious, isn't it?

What's the point in fighting for "free speech" when your inspirational leader can't form a sentence?

There's something extra under the surface when men decide to select women as the specific object of their physical attacks despite that lots of men are available for the whacking. Some might attribute it to simple cowardice and that could well be the case in the example involving the white supremacist.

In "The Armies of the Night", Norman Mailer related that, during police attacks on those participating in the Washington anti-draft protests in 1967, he observed that many of the attackers, while bypassing male demonstrators, seemed to be targetting non-agressive and obviously defenceless young women for particularly harsh treatment. While some read that Mailer was simply proposing in his narrative that this specific group misconduct was undertaken in order to shame the male protestors, his reflections went further than that. He speculated that women, and young women in particular, as the essential progenitors of the offspring required to sustain the future of the social order, were regarded by their attackers to be committing an exceptional act of community betrayal through their society with the draft dodgers and filthy hippies. We can see parallels in the relative severity of female subjugation practiced within various cultures.

But then again, maybe all woman-beaters are just fucking cowards.

.. the long & tawdry history of such vicious groups is just more and more visible in the twitter, facebook, blog era. We heard distant thunder occasionally via responsible journalism, but we now get slapped in the face by it instantly. Everyone has a camera in their pocket & can 'publish' at will.

The reality is that such dirtbags are eager to fight, eager to spew their hate. These are not normal people. They're fringe extremists, violent offenders, many schooled in prison. Of course they own guns - neccessary to defend themselves from any minority or majority who don't agree with their racist toxic twist.

I expect we'll see vigilantes going after these freaks.. overtures of a coming 'civil war'

By the way.. I like your premise that we can't brand the entire American population as losers or haters, but a serious question remains.. How much tolerance will there be in the general population for obvious losers like Trump, Bannon.. and down the line to the various conspiracy freaks (Alex Jones) or that former soldier & ex con in the blue shirt? What to make of the Canadian toxic blend? The agitators such as Sheila Gunn Reid, Ezra et al.. or political religious animals like Brad Trost or Dr Kellie Leitch?

What to make of the sordid story of Mt Polly mine? Where we find Justin Trudeau, Rona Ambrose & Christy Clark all snugly in bed with this polluter who created the largest mining disaster in Canadian history? And the topper is BC 'quietly' allowing the mine to skip the damn busted dam.. and just inject mine wastewater directly in Quesnel Lake - and call it a 'long term water management plan?

We don't have answers for the huge spectrum of these anomolies.. nor do we get explanations.. instead we get deflection wrapped in 'the Economy stupid', or 'allegedly punched' or 'Flint Michigan water is safe' - mainstream media faithfully wagging as the tail of rabid deceitful or incompetant 'authorities' or Public Servants or Presidents or PMs. There's a loophole a minute pulled out of a hat or a politicians ass to baffle, obstruct, deny, lie and down in the trenches we have Standing Rock or Berkely or Great Bear Rain Forest or the Toronto G20.. The 'law' plods now & allows or employs double standards.

Who is thw worst offender or enabler? The guy in the blue shirt? Rona Ambrose? Paul Ryan? its no longer the doing of the crime, its the tenuous path to the proving.. Trump's lawyers claim he's immune to civil prosecution.. and the system is set up now to defend that farce. The guy in the blue shirt will never be charged for 'allegedly punching a woman' & United Airlines will settle out of court bigly for viciously assaulting a seated passenger.

John, I've never seen free speech protesters show up in helmets and motorcycle armour, marching along with fists clenched. I watched the video a couple of times after I noticed the fists. There weren't a lot of librarians in the free speech crowd. Those were people who showed up to fight. They're literally seething. More like "Gangs of New York" style.

Sal, you're right. They do show up eager to fight and it's a spreading contagion, one our own right wing pols choose to ignore as they enable something similar.

The truly sad part is that the thugs will always win. Always. Might does indeed make right.

Is anyone you know willing to "sink to their level", to co-opt a cowardly avoidance phrase loved of the cowering majority?

I was just wondering what colour of shirt Trump has ordered from his suppliers in China to issue to the Free Speech Action Squads when he formalizes their participation.