That Swamp, the One Trump Promised to Drain? Well, Think Again. 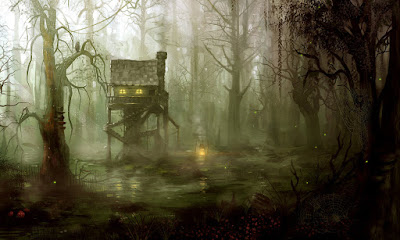 By now Hillary was supposed to be behind bars, those currency manipulating Chinese were supposed to be reeling and begging for mercy, NATO would be taken down a notch or two, the United States and its people would be luxuriating in the blessings of America First, and "the Swamp," backroom Washington, would be madly draining away.

Only not so much. Trump has surrounded himself with some curious populist reformers. They're in camps. There are the generals, arguably the sane bunch of Trump's cabinet. Then there is Team Goldman Sachs, swamp drainers extraordinaire. Then there's the Billionaire Boys' (and Girls') Club. Finally there's the High Priests of the Trump administration also known as Donald's kids, Ivanka and son-in-law, Jared Kushner.

To Trump, Washington was the temple and he was going to drive out the money-changers. Only, like pretty much everything else he promised, that was electioneering bullshit.

It seems Trump has wasted no time in expanding "regulatory capture" of the federal government. If you're not familiar with the term it describes the situation where membership in government regulatory boards and tribunals is stacked with representatives of the very industries being regulated.


President Trump is populating the White House and federal agencies with former lobbyists, lawyers and consultants who in many cases are helping to craft new policies for the same industries in which they recently earned a paycheck.

In at least two cases, the appointments may have already led to violations of the administration’s own ethics rules. But evaluating if and when such violations have occurred has become almost impossible because the Trump administration is secretly issuing waivers to the rules.

This revolving door of lobbyists and government officials is not new in Washington. Both parties make a habit of it.

But the Trump administration is more vulnerable to conflicts than the prior administration, particularly after the president eliminated an ethics provision that prohibits lobbyists from joining agencies they lobbied in the prior two years. The White House also announced on Friday that it would keep its visitors’ logs secret, discontinuing the release of information on corporate executives, lobbyists and others who enter the complex, often to try to influence federal policy. The changes have drawn intense criticism from government ethics advocates across the city.
...

The president has vowed to unwind some of the Obama administration’s signature regulatory initiatives, from Wall Street rules to environmental regulations, and he has installed a class of former corporate influencers to lead the push. Administration supporters argue that appointees with corporate ties can inject a new level of sophistication into the federal bureaucracy and help the economy grow. And efforts to trim regulations in some areas have attracted bipartisan support.

But in several cases, officials in the Trump administration now hold the exact jobs they targeted as lobbyists or lawyers in the past two years.

Mr. Trump also made it easier for former lobbyists in the government to get waivers that would let them take up matters that could benefit former clients.

During the Obama administration, these waivers were given only under a narrow set of circumstances, and had to be filed and explained in an annual report for public inspection, Mr. Shaub said. The waivers were also previously posted on the Government Ethics website. None have been posted since Mr. Trump became president, as sharing them is no longer required.

The Gullibillies who put Trump in office were often heard to say they expected him to bring a business approach to government and that's precisely what they got. Trump is treating the government of the United States as a private enterprise, property of his, his family's and the wealthiest and most powerful people in the USA. The Trump government is now controlled by and in service to a select few and they're bound to jury rig it to their own advantage. Now, how about another tax cut for the richest of the rich. I know, we'll do it in the guise of health care reform.

The blending of government and big business is fascism.
How long before he takes the Erdogan route?
It would not be so obvious but it will be subtle.

Trump is now in a position to rid himself , and family, of that pesky debt that threatens his lifestyle.

It looks like The Republicans are imitating BC's Liberals. Both make up their own rules. Both act for the benefit of their corporate sponsors. Both have a fool in charge.

Current potus will do the same thing as others who came after JFK.
Serving "Wall Street and the Military Industrial Complex"...
https://consortiumnews.com/2017/04/16/obamatrump-contrasting-deceivers/
A..non

Both act for the benefit of their corporate sponsors. Both have a fool in charge.

These are no fools ; they are members of the greedy bastards club.

These people have no conscience.


The modern conservative is engaged in one of man's oldest exercises in moral philosophy; that is, the search for a superior moral justification for selfishness.

Trump killed the TPP (Obama attempted to weasel on Americans during the lame duck session) and is unwinding free-trade globalization as promised. He's stopped 'deep state' monsters from reviving the Cold War with Russia.

Those are incredible accomplishments that blow away the giant nothings fake-liberal presidents like Obama and Clinton accomplished. And he's just getting started.

His businessman diplomacy over Assad's use of chemical weapons on civilians is something liberal pseudo-intellectuals should study (if they spent any time studying anything that ever amounted to anything.)

First it was a MEASURED RESPONSE. Unlike Obomba who spread war, chaos and terrorism across the Middle East. Trump floated the idea of regime change after. The Russians were adamantly opposed. So he dropped it.

In short: Trump handled the situation much better than Hillary would've. We'd probably be in the midst of WW3 right now if Hillary was in power trying to play Iron Lady over Syria.

Trump isn't draining the swamp. But liberals are hypocrites for making a big deal over this broken promise given their leaders do nothing BUT break promises. And when it comes to draining the swamp: bribe-taking liberal politicians ARE the swamp!

Yeah, that swamp thing was so never gonna happen. The only possible trace of a silver lining to a Trump presidency was the chance that Trump might not be quite as warlike, not get in Russia's face and so on. Unfortunately, the Democrats, since they basically agree with Trump about the swamp and about a lot of the other horrible stuff he does, chose to go after him almost exclusively for not being warlike enough, being in the Russians' pockets etc. and so now even that is toast.

And now that he's caved and made the American media's hearts go pitter-pat with a couple of bombings, I'd say the chance for impeachment is gone. He knows the open secret now: Whenever they start getting on your case, just bomb someone and bask in the gush of media praise.

@ Anon 3:35 you are unquestionably the most ignorant commenter to show up on this blog in a very long time. Something compels you to claim that Trump has killed off the "deep state" monsters when in fact he's opened a nursery to breed them. The deep state is his cabinet. "Incredible accomplishments"? Only in your mind, pal. Hillary isn't in jail. China is no longer a currency manipulator. Jobs, jobs, jobs - no, ain't coming back. Health care - better, cheaper, for everybody transformed into less, more costly, for fewer all wrapped around yet another massive tax cut for the rich. When the record is stacked up against your rhetoric, you come off as a total moron utterly oblivious to reality.


PLG - Will America experience war under Trump? There's a real possibility of that which is why the nuclear clock is closer to midnight than it has been in decades. The lack of coherent policy in the Trump administration can be destabilizing, the sort of thing that backs countries into wars not of their choosing. A couple of years ago I did an online course put on by the war studies faculty of King's College, London. It was an eye-opener especially on how nations drift into unintended wars.

The US could well drift into an unintended war, and Trump's fecklessness does have something to do with it. But what we've seen lately has little to do with Trump personally--it is rather about an intelligence community, military, and media, most of the Republican party (basically everyone without the last name Paul) and all of the Democratic party except, what, one senator from Hawaii, all acting in concert to sabotage all attempts to stay away from war and promote all movements towards war. This is a systemic and, after so many years of pervasive propaganda, by now even cultural issue.