Do We Really Need Another Reason to Despise Our Airlines? 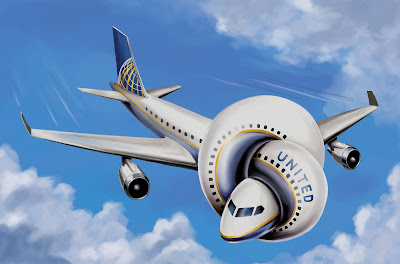 It's easy to hate airlines which, for Canadians, means Air Canada in particular. Or at least for Canadians who find themselves having to fly "Cattle Class."

My last - last ever - Air Canada ordeal was a trip from Vancouver to Toronto for a family funeral. Air Canada, in its corporate wisdom, had decided to configure its cabin in sardine mode. It was fully booked and, being a short notice passenger, I was paying full freight which, within Canada, usually requires a second mortgage on the hacienda. What made the journey so miserable was that Air Canada had reduced the seat pitch, the distance between seats, so severely that, when I sat and buckled in, that steel bar beneath the seat tray dug in deep just below my knee caps. Don't ever tell the CIA how painful that is. Long story short they couldn't find me a better seat and so I stood at the back of the aircraft for almost the entire flight. Up yours, Air Canada.

Airlines today are garbage haulers. They certainly treat their passengers like human garbage. Anyone who flew with them in the 60s and 70s will understand. Back then flying was an elegant experience. I flew back from London in one of the very first Air Canada 747s. It was so novel our pilot did a low-level fly past at the Canadian National Exhibition. Then there was Max Ward's outfit, WardAir, where they served meals with crisp cloth napkins, real silverware and china dishes. And it's all been downhill ever since.

As if we needed a reminder of the debasement of commercial aviation, United Airlines has answered the call. It involved a fairly short hop from Chicago to Louisville, a full cabin, and an already boarded passenger who refused to give up his seat for the convenience of a United crew who needed to get to the same destination. The passenger was told to clear out, he refused and three goons came aboard to drag him out of his seat, down the aisle and off the plane, cutting his lip in the process. Apparently it didn't dawn on the United Airlines crew that a plane full of passengers is full of smart phones and that smart phones have some pretty good camera technology and that everything would be almost instantly spreading across YouTube, Facebook and other sites.

Badly handled. Total mess. A pre-flight fiasco. And then the airline management decided to see if they could make it just that much worse.

The furore was followed by perhaps the most half-assed sorry-not-sorry in the history of corporate apologies, with United Airlines CEO Oscar Munoz expressing regret for “having to re-accommodate these customers”. Yes, that’s right, they translated “dragged a man out of a plane screaming” into “re-accommodate”.

United's new CEO, Munoz, didn't do himself any favours either when he sent an email to the airline's employees defending what happened and blaming the entire mess on the passenger. Oscar, you moron, did you think that email would not be leaked?

Of course to add gasoline to the fire, the manhandled passenger was Asian-American. That's revived the whole people of colour versus white American authorities issue. This screen capture of the bloodied passenger hasn't done the airline any favours either, especially not in the competitive Asian market. 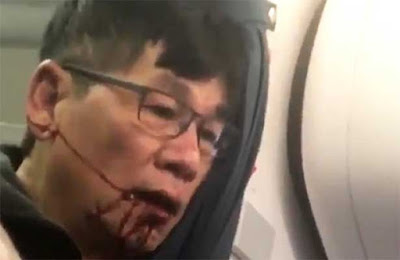 Video of Sunday night’s violent incident on a United Airlines plane in Chicago has sparked outrage in China after a witness reported that the elderly man who was dragged off the aircraft may have been targeted because he was Chinese. Images of the blood-soaked passenger from cellphone footage were circulated on China's microblogging service Weibo and have now been viewed upward of 190 330 million times. The perceived prejudice against the man—and United’s lackluster response—drew condemnation and calls for a boycott of the airline, the Associated Press reports.

CBC News reports that United shares have fallen 4% this morning, trimming about a billion dollars off the company's value. It'll be a while before United finds out what the Asian flying market will cost the airline.

The backlash in Asia is a problem for the company, as the continent is a key growth area for many U.S. carriers.

United operates more non-stop flights from the U.S. to more cities in China than any other airline. The company got about 14 per cent of its 2016 revenue from flying Pacific routes.

Somewhere Max Ward is probably looking down, shaking his head at what once was and is no more, possibly shedding a tear.

When the airline industry got off the ground it had to compete with trains and boats which, of course, had comfortable seats. Since the decline of rail and water transport the airlines have less incentive to keep passengers happy. Coincidently, the Reagan/Thatcher deregulation airlines came at just the right time to make travelers miserable.

I hope the passenger abused by United sues large.


You're right, Toby, it was a better time at the dawn of jetliner transportation. When I was in grade school I had a friend whose parents took him to visit the relatives in England and travelled via the QEII. In the military I traveled by CN Rail. My travel warrants fixed me up with a roomette and proper meals with wine from a decent menu served in the dining car with fresh linens, silverware, china, crystal and even fresh flowers on the table. I even had tickets for two drinks per day in the club car, all on the defence department. Now that I look back on it I find it hard to imagine where that genteel comfort went, how we came to lose it?