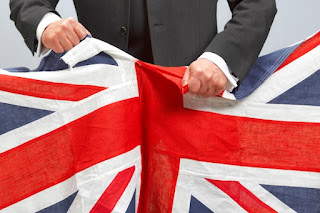 At times she seems to think herself a latter day Margaret Thatcher but Theresa May's legacy might be as the prime minister who destroyed the United Kingdom.

She's been pushing the European Union for a new deal to grease Britain's Brexit from the EU. That's earning May a lot of pushback, most recently from Angela Merkel who added her voice to the chorus saying there'll be no deal, no negotiations for a deal, before Britain is out.

Scottish leaders say if the UK is out of the EU, Scotland wants out of the UK and they're demanding a second referendum. May says no but her arguments are lame and likely to fuel the drive for Scottish independence.

Now the EU is sending another body blow to 10 Downing Street with an expected announcement that Europe mght allow a unified Ireland to join the EU after Brexit. Nice. Peel off Northern Ireland from the United Kingdom. With the Scots in the mood to say adios that would leave England and Wales, if May could persuade the Welsh to stay put. The Britain, formerly known as Great Britain, a once United Kingdom no more.

Sounds like the gloves are off.
Posted by The Mound of Sound at 12:10 AM

All this horseshit has been driven by the English. Only fitting the English enjoy the fruits of their labours. The Scots and Irish don't deserve any of the benefits of irrelevance, impotence and impecuniosity. The Welsh are used to it anyway so nothing will change for them. But damn those English sure deserve what they're about to get.

Going back to pounds, shillings and pence and building Morris Minors will not make Britain great again.
Jokes aside; Britain's excuse for leaving was based upon a dysfunctional government in Brussels and a unhealthy dose of racism.
Liz May; like Farage is a good example of the English upper class that lives in the nineteenth century and seems quite unaware of the real UK outside of London and the south east.
FWIW ; May suggested that the UK would make a first strike with nuclear weapons if she thought necessary

@ Anio. Why not, nothing else they've tried since David Cameron has worked.

@ Dana. They are, as the wise old judges proclaimed, "the authors of their own misfortune." Deserved as the consequences may be, I find no joy in it. Just another victim of the Age of Stoopid.

@ TrailBlazer. I'm pretty sure you meant Theresa May, not the Greens' Liz May. Yes, Britain's ruling class is out of touch. Pity Labour is in such disarray.

@ TrailBlazer. I'm pretty sure you meant Theresa May, not the Greens' Liz May. Yes, Britain's ruling class is out of touch. Pity Labour is in such disarray.

Correct; my apologies.
The so called left is in disarray worldwide.
The, so called , right control the conversation.

We will never , without revolution, see progressive governments in the western world.
Until that day comes the best we can achieve is to make the 'right wing' miserable.

Blogger Dana said...
All this horseshit has been driven by the English. Only fitting the English enjoy the fruits of their labours.

The Welsh are , by repute, sheep shaggers.
They get their kicks from the English with their riding crops!!!