Where Democracy Goes to Die 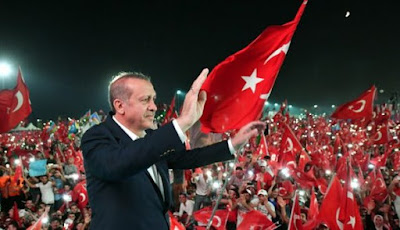 It's NATO's only Muslim member state. It's the only non-European prospect for membership in the European Union. It's been democracy's toe hold in the Muslim world. All of that may be about to change.

Turkey stages a constitutional referendum on the 16th, one that could hand Erdogan Recep quasi-dictatorial powers. The Economist says the deck is already stacked.


In the campaign for Turkey’s constitutional referendum ...the Yes side has harnessed the power of the state to crush the Noes. Selahattin Demirtas, co-leader of a pro-Kurdish party, was poised to become one of the main No voices but has ended up behind bars on trumped-up terror charges. He faces 142 years in prison. A Kurdish-language song calling for No has been banned. A study of 168.5 hours of campaign coverage on 17 national television channels at the start of March showed that Yes supporters got 90% of the airtime. The route from Sabiha Gokcen airport, outside Istanbul, has more than a dozen building-sized banners with an image of the president, Recep Tayyip Erdogan, or his prime minister extolling a Yes vote. Giant No banners are nowhere to be seen.

Stacked as it is, the ballot could not be more consequential. Voters must decide whether to abandon a parliamentary system in favour of an executive presidency that would give the head of state complete power over the budget and the executive, and huge sway over the judiciary. MPs would have minimal powers of scrutiny.

The result will help determine the fate of Mr Erdogan, who has governed since 2003—first as a reforming prime minister, but lately as a strongman president who has come to treat all opposition as a form of treason.
...

Early in Mr Erdogan’s rule, Turkey made great progress towards democracy. But Turks who can remember the detentions and torture after the military coup in 1980 say that today’s are a throwback to those dark times. Workers inform on their colleagues, students on their professors, husbands on their wives.
...

Getting the Trains to Run On Time

It is easy to forget how abysmal the economy was in 2003 when Mr Erdogan came to power. The crisis of 2000-01, the third in a decade, caused collapses in the currency and GDP and led to the intervention of the IMF. Under the stewardship of the fund and with encouragement from the EU, Mr Erdogan’s government brought down inflation, which had briefly exceeded 100% in the early 1990s, and rescued the banks. Foreign investment soared. The country became Europe’s workshop. Thanks to their newfound stability, Turkish entrepreneurs grew rich.
...

France and the United States have powerful presidents, too. But under the new constitution, unlike the Assemblée Nationale and Congress, the Turkish parliament will not control the details of spending or have a say over presidential appointments. Neither will it be able to subject the cabinet to questions, except in writing. Besides, in France and America the independence of the media and the courts is well-established. In Turkey Mr Erdogan has spent recent years turning them into his fiefs.
...

After Germany and the Netherlands refused to accept government ministers campaigning for a Yes among Turks in their countries, Mr Erdogan accused them of “Nazi practices”. The Dutch, he said, had murdered Muslims in Srebrenica during the Balkan wars. No matter that they were in fact UN peacekeepers who killed nobody. Mr Erdogan is calculating that, when Europeans hit back, patriotic Turks will rally to the flag.

Moscow On The Bosphorus

Erdogan is signalling that he is prepared to shift towards Russia. This may be a ploy to provoke the EU. But it also reflects how the army and the bureaucracy are increasingly in thrall to a “Eurasian” faction whose leaders spurn NATO and the West and look to a Turkish version of the nationalism that has served Vladimir Putin. Although Turkey shot down a Russian warplane on the Syrian border and Russia’s ambassador to Turkey was assassinated last year, military and intelligence co-operation between the two countries has never been so close.

NATO is worried. So is the EU, which has struck a deal with Turkey over Syrian migrants and is mired in increasingly futile talks over Turkish membership. Under Mr Erdogan, an essential ally in a troubled region is drifting away.
...

Whatever the result on April 16th, Turkey has entered a dark period. A vote for Yes would saddle the country with an elected dictator. A No would not save Turkish democracy. But it would let it live to fight another day.

"The country became Europe’s workshop." Well, maybe. But I've heard that a lot of Turkey's growth was led by a real estate/construction boom. Of course those never lead to any problems, do they?

Turkey took on a role a bit like Mexico vis a vis the US wherein big companies moved factories to where the labour is cheaper and regulations lax.