How Long Can Trudeau Look the Other Way? 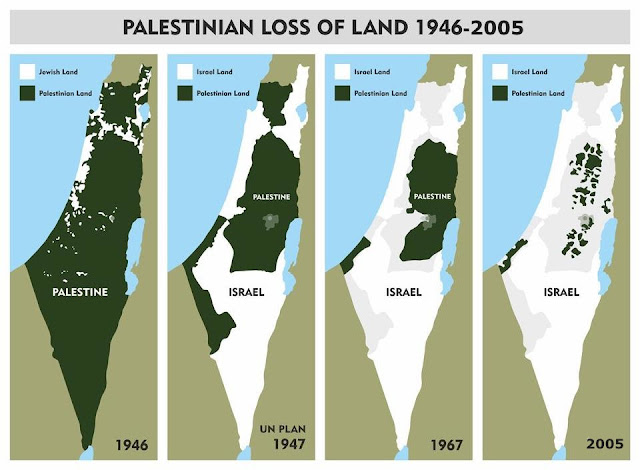 Israel and its Palestinian captives are approaching the 50th anniversary of the occupation of the Palestinian territory. Israel, as the maps above illustrate, has been a cancer on the Palestinian homeland, steadily dissolving it into nothingness. The graphic, you may note, hasn't been updated since 2005. More Palestinian land has been stolen since then.

Canada not only accepts this but our Liberal prime minister, just like his Conservative predecessor, wholeheartedly supports the government of Netanyahu, especially in votes in the UN General Assembly.

As Israel descends into a radical rightwing state, one which overtly rejects democracy, Canada, the United States and a handful of bought-off island states in the central and south Pacific are Israel's sole backers abroad.

Two former heads of Israel’s powerful domestic intelligence service, the Shin Bet, have made an impassioned and powerful intervention ahead of events to mark the 50th anniversary of the country’s occupation of the Palestinian territories in June.

One of the pair warned that the country’s political system was sunk in the process of “incremental tyranny”.

Ami Ayalon and Carmi Gillon were speaking ahead of a public meeting at a Jerusalem gallery which is threatened with closure for hosting a meeting organised by the military whistleblowing group Breaking the Silence, one of the main targets of the rightwing government of Benjamin Netanyahu.

“Incremental tyranny [is a process] which means you live in a democracy and suddenly you understand it is not a democracy any more,” Ayalon told a small group of journalists, including the Guardian, ahead of the event. “This is what we are seeing in Israel. The tragedy of this process is that you only know it when it is too late.”

Ayalon cited recent moves by ministers in the Netanyahu government to change the laws to hit groups such as Breaking the Silence by banning them from events in schools and targeting their funding, while also taking aim at the country’s supreme court and independence of the media.

That's right, folks. As far as those in control of Israel's government are concerned, the West Bank is "liberated" as in the Palestinians are never, ever getting it back, international law be damned. And that is what Justin Trudeau, in the name of Canada, is backing whether he pretends to see it or not.

Ayalon suggested an Orwellian dynamic that supported Israelis in a state of fear for political ends. “What is necessary to pave the way for this concept of incremental tyranny is an ongoing war. It is like 1984. There is always an enemy.”

Just days ago Regev, a controversial rightwing minister, said that Breaking the Silence and others who supported it “had no place in Israel”.

The two former Shin Bet chiefs were speaking as it was revealed that one of Israel’s main official ceremonies to mark the anniversary of the six-day war would controversially take place in the settlement of Gush Etzion in the West Bank.

The two ministries will spend a total of 10m shekels ($2.74m) on events marking the anniversary of what the education minister, Naftali Bennett, and Regev described as “Israel’s glorious victory in the six-day war, and the liberation of Judea and Samaria [the West Bank], the Golan Heights and the Jordan Valley”.
Posted by The Mound of Sound at 3:16 PM

To paraphrase Joe Stalin, "How many divisions do Abbas and Mashal have?"

Trudeau can and will follow in the footsteps of Harper on the subject of Israel, as will Mulcair. This is the path of least political risk, human rights and international law be damned.

"How Long Can Trudeau Look the Other Way?"

He will look in whatever direction Trump and Netanyahu tell him to.

It beggars belief.. it really does ..
some sort of embedded old stock racism, one supposes
Is it personal? Or just political.. ?