The Leader of the Free World Has No Clothes. 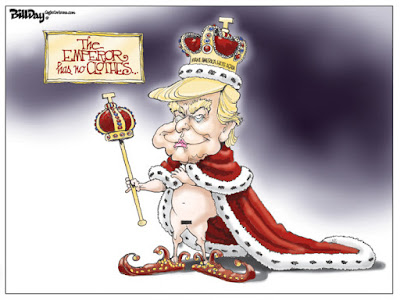 There's coherent policy for you. On Monday the President of the United States of America was dismissive of his Syrian counterpart, Bashar Assad. Trump dismissed Assad saying the murderous tyrant was none of America's concern.

Two days after the most powerful man on Earth gave him a pass, Assad launched a nerve gas attack on Syrian civilians, killing scores, many of them children. The Great Orange Bloat rose up on his hind legs to bellow that it was all Obama's fault. Now he's said to be planning punitive air strikes against Assad.

Drew cites Trump's ill-fated health care reform bill, a piece of legislation drafted by Paul Ryan that would have broken every Trump campaign promise for health care. Trump had promised better coverage, cheaper premiums and that every American would be covered. Ryan's proposal turned those promises into a sham and yet Trump bought it, made it his own.

Trump was clearly unaware of and unperturbed by what was in the bill; he wanted to win. He told his aides that he simply wanted to sign a bill, that it would make him look presidential.

Trump’s first great legislative defeat threatens to define his presidency. He came across as blundering and incompetent. He is the first modern president to lose his first major piece of legislation. This came on top of other unfortunate firsts: Trump is the first president whose approval ratings began to go down after he won the election and then after the inauguration, and that have kept doing so since. Recent polls show his approval ratings to be from 35 percent to 42 percent, not enough to form a governing majority.

There’s been a great deal of speculation about shifting alliances among Trump’s White House staff—it’s virtually a daily exercise—but in the end Donald Trump defines his administration. Trump has a mediocre staff, whom he doesn’t treat well. They’re hesitant to give him news he won’t like for fear of being screamed at, a frequent event. Experienced potential aides haven’t been keen to work in a Trump White House and though it’s not widely known by the outside world many of those who are there are unhappy. As one close observer put it to me, “They came to work for the president but found themselves working for Donald Trump.” The moody man at the top is strongly affected by what’s in the news.

Yet despite the weakness and disorder of the president’s staff, and though previous White House staffs have tried it (if not as thoroughly but without success), Trump and his top aides seem particularly determined to hold power throughout the government. This is why even more than halfway into the first hundred days most of the Cabinet officers are home alone. It’s not accidental that few of them have a deputy, not to mention the legally established complement of assistant secretaries and deputy assistant secretaries—some 550 appointments the president makes and the Senate confirms.

Yet the thinness of the ranks of officials to propose and implement the laws is actually also how Trump and his top aides want it. “A lot of those jobs, I don’t want to appoint someone because they’re unnecessary to have,” Trump said in late February. “In government, we have too many people.” Trump, Bannon, and son-in-law Jared Kushner have been particularly keen to keep control of the government in the White House. Kushner now has more assignments than any single figure known of in a modern White House and shows no inclination to devolve power. These people may well be taking on the impossible, and this would be true even if they’d had any government experience. ...Kushner is in over his head. But Trump, as inexperienced in government as his son-in-law is, does not seem to realize that, and so he keeps loading new responsibilities on him, apparently as the only person inside the White House he’s been able to trust.

When the subject comes up, as it does incessantly in Washington, of whether in fact Trump will end up serving as president for four years, a major argument against his somehow having to leave office (for reasons other than health) is that he has a strong base. Richard Nixon also did, until he didn’t. Gradually, Nixon’s onetime backers became disenchanted for one reason or another; he still had support at the end, but it wasn’t strong enough to save him. How long will Trump’s base stick with him even in the face of seeing their hopes betrayed? This isn’t a fanciful question: a recent poll by Geoffrey Garin for Priorities USA, showed a ten-point drop in support among Trump voters in the third week in March (the week the health care bill failed).

A lot of Republicans who had deep misgivings about Trump went along with him before and after the election because they assumed that he could produce legislation dear to their hearts. But what if it turns out that he can’t? Politicians are highly pragmatic people; they will support a president as long as he isn’t too costly to them. But if he becomes too expensive to their own reelection, all bets are off. The discontent with Donald Trump on Capitol Hill runs very deep and also very wide. I’ve been told that upwards of two-thirds of the Senate Republicans, in particular, discuss—in the gym and in clusters on the Senate floor—their desire to see him gone. These senators talk rather openly—even with their Democratic colleagues—about their fear of Trump’s recklessly getting the country into serious danger, about the embarrassment he causes it in the world (his petulantly refusing to shake hands with Angela Merkel was just one example of his mishandling of foreign leaders), about his overall incompetence.

Whether or not anything is ever proved, most members of Congress, including Republicans, think something was amiss in the Trump campaign’s relationship with Russia, or Russians, including plutocrats who owe much to Vladimir Putin. No one thinks that FBI Director Comey would have opened, much less announced, a counter-intelligence investigation of the Trump campaign’s possible collusion with the Russian government in its attempt to sway the election if he didn’t have serious evidence. On the Senate floor the other day, a cluster of Republicans jocularly made a pool on the way in which they think Trump will be forced to leave office.